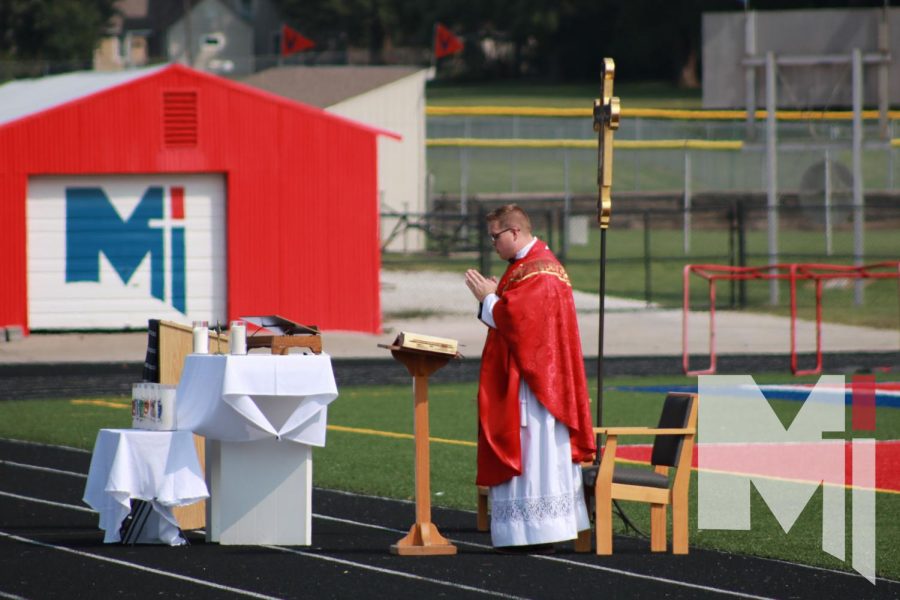 Father Anthony Mersmann says the first Mass of the school year outside. As a new member of the staff, this was Mersmann's first time giving Mass at Miege, and due to the pandemic, it brought challenges for CMT.

He was a kid in Eudora, Kansas. He grew up on a farm as the second youngest of nine kids. He worked at a fireworks stand, and then later at his local grocery store. Today, he’s the new chaplain, Father Anthony Mersmann.

From a young age, Father Mersmann was drawn to priesthood and encouraged by those around him to become one.

“I had a lot of people tell me I would make a good priest,” Father Mersmann said. “Between those people and praying a lot about it, it was pretty obvious from an early age that God was inviting me to check out the priesthood.”

Father Mersmann was raised in a devoutly Catholic family, one that he remains proud of to this day. He now has brothers, sisters, and other relatives spread out all over the world with varying religious beliefs.

“[They’re] anywhere from atheist to general Christian,” Father Mersmann said. “Between my eight siblings and I, we cover most of the U.S. and Southern Africa.”

After a last minute change of plans, Father Mersmann was reassigned from Bishop Ward to Bishop Miege this year. He was ordained about five months ago and expected to be sent to one of the Catholic high schools.

“Once you get close to ordination, the archbishop and the priests who help assign you ask you if you’re open to high school ministry, and I always said yes,” Father Mersmann said.

Miege is his first Catholic school experience, having gone to public school his whole life.

“I love it here,” Father Mersmann said. “I get to work with Bill [Creach] a lot, we have a beautiful chapel, and our administration and teachers are solid here. I love getting to know them.”

The circumstances caused by the current pandemic have made high school ministry look a little different. However, since this is a first-time experience, there is nothing for him to compare it to.

“This is all I know,” Father Mersmann said. “This is what high school ministry looks like to me because I have never experienced anything different. In a weird way it’s a little bit easier than ‘normal’ chaplaincy.”

Although the job is easier, it is also more challenging when it comes to successfully arranging the usual activities planned by the campus ministry.

“We really want to have a lot of these [activities] like retreats and all-school Masses,” Father Mersmann said. “When we do want to make something happen, it takes a lot more planning that it normally would.”

Father Mersmann was already familiar with several of the Miege staff: President Randy Salisbury and Principal Maureen Engen are parishioners at the church he’s assigned at, and math teacher Ms. Kat Kennedy is his cousin. Father Mersmann said he looks forward to getting to know everyone better and for everyone to get to know him.

“I’m jumping in,” Father Mersmann said. “I have no idea how long I’ll be here and I just want to be a positive presence for however long I’m here.”

Reflecting on his own high school memories and experiences, Father Mersmann gave a word of advice to Miege students.

“When I was in high school, I really wish I would’ve been more confident in my own goodness,” Father Mersmann said. “In high school we can spend a lot of time doubting how wonderful we are and investing our identities in stupid things.”

His main goal for his time at Miege is to “foster the Eucharist” in people and encourage them to be more aware of God’s perspective of them.

“Pray for the ability to see yourself as God does because he’s the one that sees you the most incredibly,” Father Mersmann said. “No one else loves you as much as God himself does.”