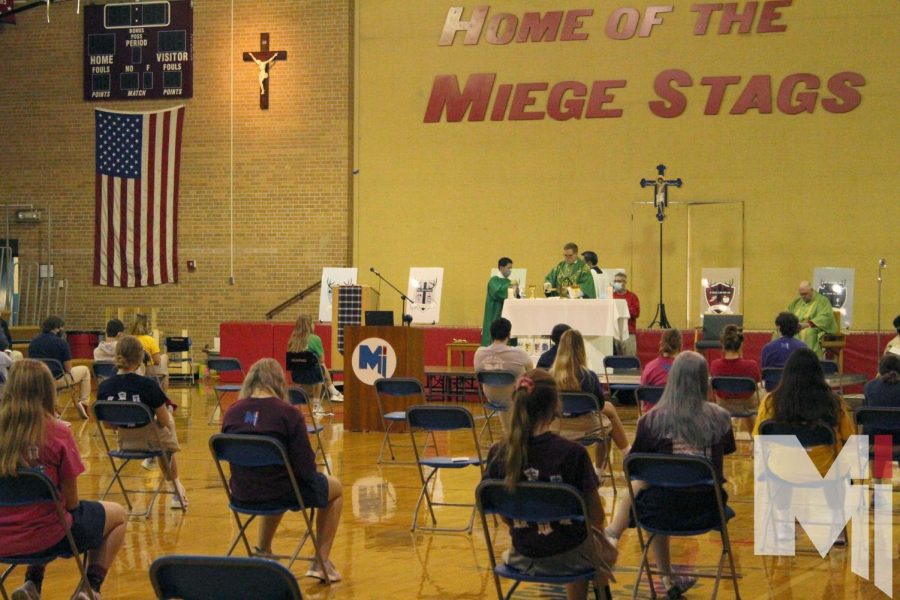 Father Mersmann says Mass for seniors attending in the gym. The rest of the school is live streaming in faith families.

All-School Mass is traditionally celebrated in the gym with students sitting with their herds, but due to COVID-19, Campus Ministry had to make many adjustments. This week’s Mass was the first time that all students were in the building for Mass.

Students were separated for the Oct. 21 Mass due to safety guidelines. Seniors were in the gym, and everybody else was with their faith families watching the live stream.

“It was nice to have my grade all in the gym again,” senior Mazie Young said. “It reminded me what school was like before the pandemic.”

It was different for Miege to now be celebrating as a whole in front of the body of Christ, and every grade will get that chance to celebrate in the gym.

“We will rotate who goes to the gym, so next time it will be the juniors, then the sophomores, then the freshman,” Campus Ministry director Bill Creach said.

Miege tried to keep things relatively the same so students could still be involved.

“I enjoyed playing handbells in front of everyone in the gym, even though I was a little nervous,” freshman Sophia Gasset said.

There were difficulties anticipated for the live streaming, but students and teachers adapted.

“Our audio was very quiet, and I happened to have a karaoke microphone,” science teacher Angela Lueckenotto said. “I set it next to the speakers I already had, and it made the sound a lot louder.”

Being in the gym where the Mass was being held by Archbishop Naumann gave seniors a chance to be closer to the liturgy.

“Something that stuck out to me during the homily was that we should be joyful,” senior Riley Hagen said. “Just like the person who served him food late one night at Wendy’s.”

For this being Miege’s first Mass together, this was a learning experience for everyone.

“I was most moved by the eucharistic ministers distributing communion to the classrooms,” assistant principal Joe Schramp said. “It reminded me about Jesus giving the bread of Christ to the apostles.”

At the beginning school year, the first Masses celebrated were when students were in hybrid learning mode and the weather was still fairly warm.

“I appreciated all the effort that admin put into getting us the opportunity to have Mass,” Young said. “It felt a little more disconnected than a regular mass in the gym does.”

Creach said he wasn’t sure if outdoor Mass was possible post-COVID, but he would be talking to Father Mersmann about it.

For theology teacher Ross Dessert, Mass in the stadium was a peaceful experience.

“I loved that we were all together but separated,” Dessert said. “The physical separation created a more prayerful environment.”