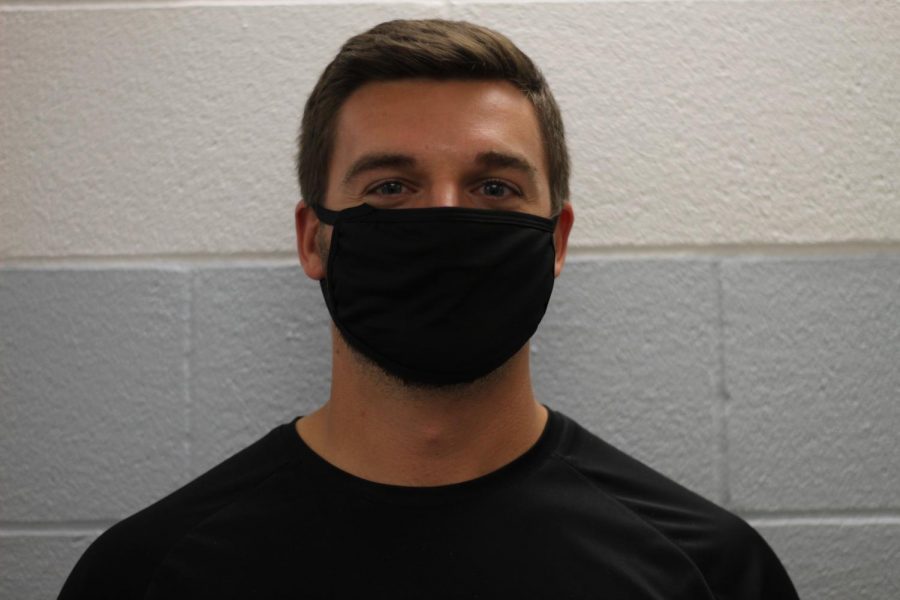 Walking down the math hallway may seem a little different this year. Surprisingly, the reason for this is not related to COVID-19.

Although Kennedy is also brand-new to Miege, this isn’t her first time teaching at a Catholic high school.

“I taught at Aquinas for four years, and substituted at St. James too,” Kennedy said. “I’ve seen all the Catholic high schools.”

Kennedy also taught at a Catholic high school in Belize before Aquinas, where she was a missionary for the Society of Our Lady of the Most Holy Trinity (SOLT).

“I was encouraged by my friend who is a Servidores Sister,” Kennedy said. “She just encouraged me to do something different.”

When Kennedy returned to the United States, she taught at St. Thomas Aquinas and St. James and got engaged at her time at Aquinas. From there, Kennedy had a plan to move to Belize and get married.

“However, God had a different plan for me,” Kennedy said. “In September of 2019, my fiance passed away from a brain aneurysm. So I didn’t get married, I didn’t move.”

Kennedy spent the rest of the year doing missionary work and was eventually led to applying for a job at Miege.

“I’m pumped because ever since I graduated high school, I’ve told my mom that if I am supposed to stay at Catholic schools, I want to end up at Miege,” Kennedy said.

At Miege, Kennedy is a math teacher and the swim and dive coach. However, her favorite thing about Miege goes a lot deeper than academics or athletics.

“I’ve gotten to build wholesome relationships with students that show that I don’t just care about academics, I care about your soul,” Kennedy said. “The kids here are so real, and I appreciate that.”

Ms. Kennedy’s favorite hobbies include fishing, hiking and going to sporting events.
The flags in the math hallway represent all of the countries where Ms. Kennedy taught. Some of them include Mexico, Guatemala, and Papua New Guinea.
If Ms. Kennedy could have any superpower, she would have the ability to fly because she could go anywhere for free.

Just like Ms. Kennedy, Mr. Long has travelled throughout the world as well.

It began after college, when Long travelled for about a year and a half in South America, teaching English as a way to fund his travelling.

“I planned to go around the world, but I only made it to nine countries after I met my wife in Ecuador,” Long said.

Even when Long returned to the U.S., his adventurous experiences were far from over.

“I was a barista for a while, and I also did a little metal work on the side,” Long said. “I also went up to Alaska and worked on a fishing boat for a while.”

Long also worked at Christian Foundation for Children and Aging (CFCA), now known as Unbound. The program allows for anyone to sponsor a child or an elderly person around the world.

“After CFCA, I got a job at Holy Cross Catholic School in Overland Park,” Long said. “I was the art teacher there for 15 years before coming here.”

At Miege, Long teaches all of the art classes except AP Art.

“My favorite thing about Miege is that it’s a smaller school where you can get to know people,” Long said. “Everybody here is really welcoming.”

Mr. Long’s favorite hobbies are camping or doing anything outdoors, and riding anything with two wheels.
Mr. Long has ridden his motorcycle all over the United States and to Mexico.
If Mr. Long could have any superpower, he would pick flying because it would be cool.

Out of the three, Mr. Darrow had the least distance to cover to get to Miege. In fact, he came from just across the street.

“Last year, I was at St. Agnes and St. John Paul II as the P.E. teacher,” Darrow said. “Before that, I was a special ed teacher in Leavenworth.”

Although Darrow was not a teacher at Miege last year, he was involved as a coach — and still is this year.

Now, Darrow is no longer just a coach for Miege.

“I teach freshman boys’ P.E., and I also help in the Learning Resources Department,” Darrow said.

Although athletics are a big part of Darrow’s career, his favorite part about Miege goes deeper.

“The community is amazing, and all the kids are really good to work with,” Darrow said. “And just seeing all the people that have graduated, and how they still stay here. It feels like a small town within Kansas City, and that’s awesome.”

Mr. Darrow’s favorite hobby is fishing multiple times a year.
If Mr. Darrow could have any superpower, he would choose never having to sleep because he could get so much done.