Stags go all out with Halloween costumes 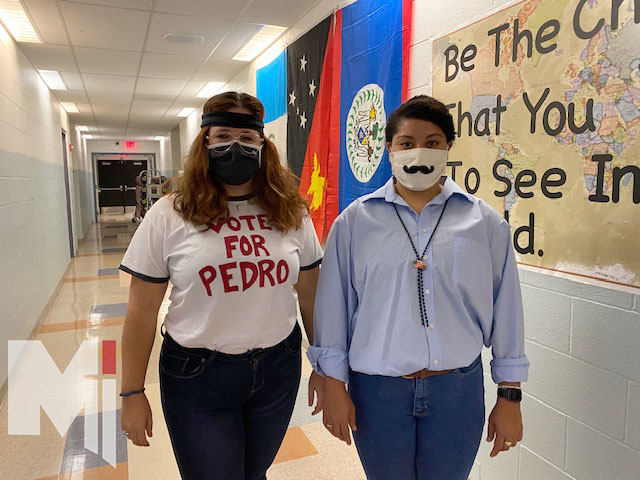 Math teachers Taryn Frank and Kat Kennedy pose as Napoleon Dynamite and Pedro. They both said they enjoyed dressing up together and having people see their costumes.

It’s that time of the year when people have the chance to dress up as anything they please. At Miege, there are a number of people that bring their A-game when it comes to their Halloween costume.

Senior Mandy Henshaw is well-known for always going all out with her costumes. This year she showed up as Buzz Lightyear.

“I always want to go all out for Halloween because my favorite thing to do is make things, and Halloween provides me with the perfect opportunity to make a fun costume,” Henshaw said. “I have so much fun making the costumes because they are basically like an art project to me.”

Her twin sister, senior Abby Henshaw, who dressed up as The Grinch, said that her sister’s dedication to creating costumes inspires her to do the same.

“Mandy has been working the whole weekend and hours every night on her costume for this year,” Abby Henshaw said. “I told her that she had to make a costume better than any before for her senior year since she has set the bar so high.”

Teachers also came to school in creative costumes. Math teachers Taryn Frank and Kat Kennedy dressed up as Napoleon Dynamite and Pedro from the movie “Napoleon Dynamite”. Together, they planned for their outfits and accessories to represent the famous dynamic duo.

“I actually really like going for ‘complex’ costumes – things that have props, wigs, hats, etc,” Frank said. “Anything with a creative touch. I love seeing people in awe of the costume, and matching with someone is much more fun.”

While students may dress up on actual Halloween, some teachers dress up just so their students can see a different side of them.

“I typically just dress up at school,” Kennedy said. “I like doing it just so the students can see a fun side, because I feel like sometimes as a teacher it’s hard to show that personality.”

Whether it’s dressing up, the season itself, or the ability to be artistically expressive, Halloween is a well-appreciated holiday among the Miege community.

“I love it because the weather is beautiful and it’s the beginning of fall,” Mandy Henshaw said. “It also gives me an opportunity to look like a fool but it being socially acceptable.”