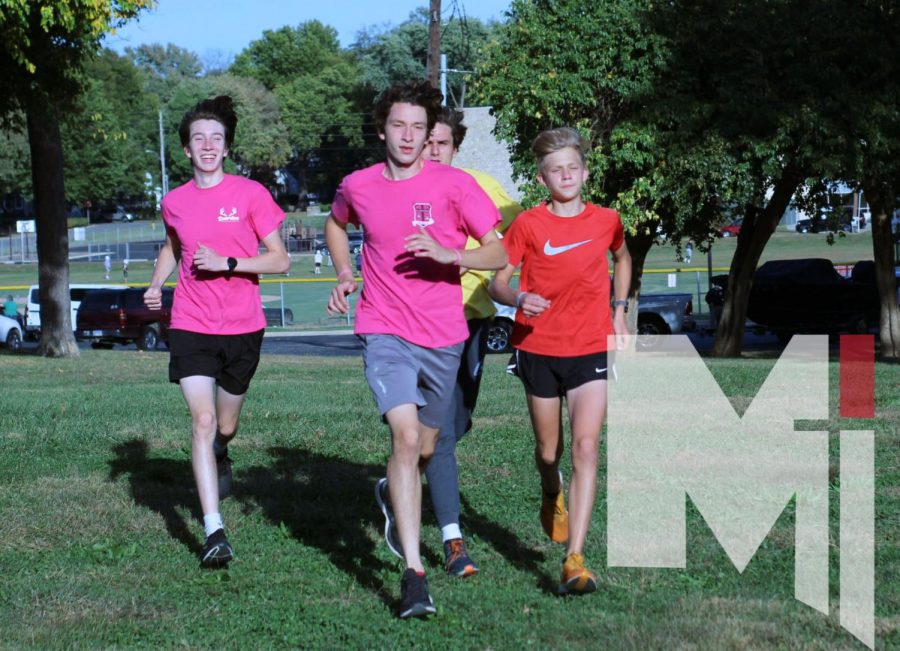 Freshman star Micah Blomker and Senior Zephan Rodriguez come back from practice with their team a week before state championship.

For the first time in more than 20 years, the boys’ cross country team were regional champions, at the Kansas 4A state championship the team took second place which has not happened since 1990.

As a leader of the team, senior Zephan Rodriguez said he has seen vast improvement from the whole team since he started running his freshman year.

“It is crazy to me that we had a shot at the state title because my freshman year we hadn’t even been to state in over a decade and we haven’t won a state championship in over twenty years,” Rodriguez said.

He didn’t join the team in hopes of competing for a state championship or looking to compete at each meet. He started running just for fun and the better he got the more serious he was about running.

“I started running because it was such a great way to get out my energy and get a distraction from the hecticness of my life,” Rodriguez said. “Then, the team started to do well and I was actually doing it for the competition as well.”

Running isn’t seen as a team-oriented sport, but Rodriguez said that his teammates are the most important part of his success.

”Without my teammates I know that I would have never gotten to the position I am,”  Rodriguez said. “They help me push myself harder and get more motivation to get better,”

“I think Micah’s driven a lot of our runners to continue pushing themselves even harder because they see there’s another level they can reach,” Rodriguez said. “Having an experienced and talented underclassman here is good motivation for the other young guys giving them a strong model that’s their age to work for.”

Over the summer after running too much Blomker became malnourished and had to stay away from running for 3 months, but he didn’t skip a beat when he got back as he is now a top 20 freshman cross country runner in the nation.

“I think I can get a lot higher than top 20 in the nation,” Blomker said. “I am faster than all those kids on the track, If I was able to get more running in during the summer, I would be ranked higher.”

Blomker comes from a family of runners. His great grandfather was an Olympic athlete and world record holder.

“My great grandpa’s success motivates me because I want to continue his legacy and run for God,” Blomker said.

Blomker also attributes his abilities to good teammates and the help he’s received the last few years from older runners.

“I think the companionship that comes from the team and the encouragement really help boost my confidence,” Blomker said. “My favorite part of running is the friends I get to run with and the feeling of satisfaction after running a good race.”

Both runners said that through running they’ve learned many lessons that can be applied to life and try to apply their knowledge they’ve gained from running into their lives.

“Life is a race and just like in cross country you’ll have up and downs or triumphs and trials but you have to push through,” Blomker said. “It’s not going to be easy to reach your goals but that’s the way life is.”