The Show Must Go On: Theater department showcases its first virtual play and musical 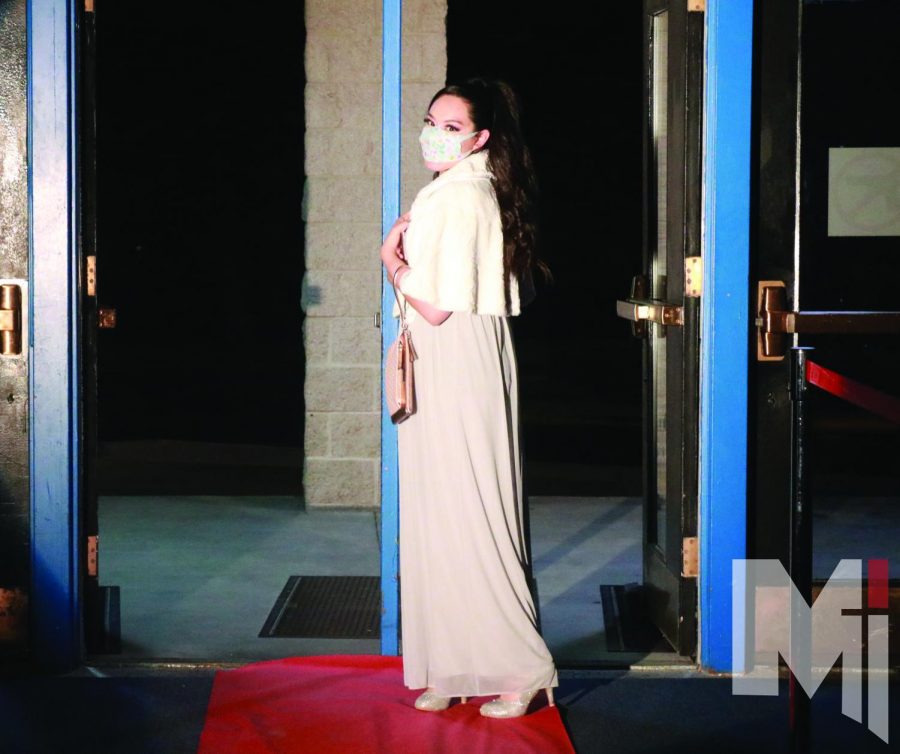 Senior Yasmin Armendariz strikes a pose at the red carpet premiere party of “EMMA: A Pop Musical” and “The Radio Play Disaster.” Armendariz played the role of Jane.

As loud chatter fills the dark auditorium, the only light source comes from the projector located behind the seats — this is not a normal theater production. Theater students begin filing into the auditorium walking on the red velvet carpet to join other castmates to celebrate the premiere of “EMMA: A Pop Musical” and “The Radio Play Disaster.”
Although extracurricular activities may look a little different this year, theater department teacher Mrs. Elizabeth Nelson made sure the show went on even with COVID-19 restrictions.
Before premiering in November, both the musical and play were pre-recorded and edited into one video to live stream for the entire Miege community to enjoy.
“The virtual production had a lot of different stresses, it was more stressful on me and my editing,” Nelson said. “It doesn’t have the same payoff. It’s exciting to see come alive, but due to the circumstances this year, that was not the case.”
Not only was this the first theater production to be showcased virtually, it was the first time that a student has directed a play. Junior Sophia Nordling took on the responsibility of directing the play, “The Radio Play Disaster.”
“It was very interesting to be on the management end of the production,” Nordling said, “Since I’m used to being the one performing, I was intimidated at first, but I grew to become comfortable with directing because I knew exactly what it felt like to be an actor so I could understand what was helpful versus what wasn’t.”
The entire process took about a month and a half, which was faster than last year due to the fact there weren’t any sets to build or paint. There were about two in-person rehearsals a week.
“When we rehearsed as a group, it was lots of fun,” Nelson said. “I was proud of the production when it was finished, but I missed the magic of live theater.”
To celebrate the first virtual production in theater department history, Nelson put on a red carpet event to celebrate the actors’ dedication during a difficult time. The students dressed up and strutted the carpet while entering the auditorium to witness the premiere.
“I do think that COVID has unfortunately affected the future of the theater program,” Nordling said. “I really hope that we can all sing and dance together again and perform for some type of audience. Not having the energy from the audience makes a huge impact on the overall production, so I hope that before I graduate I can perform again at Miege.”