Like A Girl: New female division added to wrestling 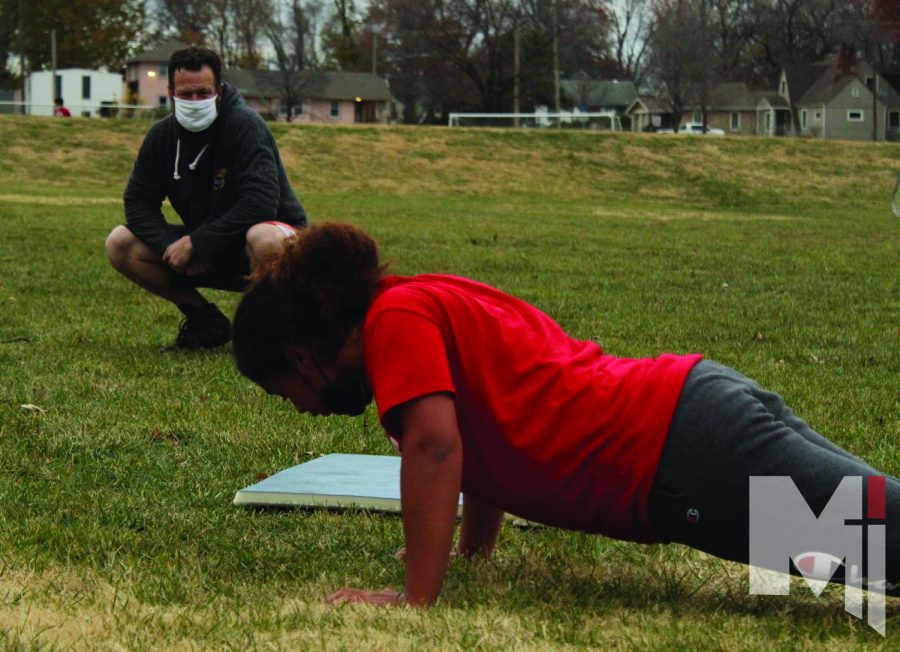 Coach Ryan Wrigley gives critique on form while sophomore Jasmine Tolson goes through the wrestling conditioning routine. Wrestling practice is split into small groups, each either working out or learning new strategies for wrestling.

Shouting in the wrestling practice room echoes as sophomores Nohemi Gurrola and Jasmine Tolson and freshman Maria Ziegler move into stance. This practice is like any other for them — music playing loud, new moves being taught and perfected for upcoming tournaments.
But one thing is different in the wrestling room this year. Head wrestling coach Ryan Wrigley’s decision to add a girls’ team has come after an interest from several girls.
“I told the girls, ‘Even if there’s just one of you, that’s enough interest for me to push for girls’ wrestling,’” Wrigley said.
For Gurrola, who managed boys’ wrestling last season, this has given her the opprotunity to pursue wrestling.
“I have a huge thing about being sexist,” Gurrola said. “Because when I would ask, ‘Can I do this sport?’ and people are like, ‘No, because you’re a girl, that’s a guys’ sport.’ That would bother me.”
The Kansas State High School Activities Association (KSHSAA) voted in April 2019 to approve girls’ wrestling to become the 23rd championship sport in Kansas. Now, according to Wrigley, Miege has become one of the first Catholic schools in the area to have a team.
At one point, Miege had a female wrestler on the team when Wrigley started coaching in 1996. According to Wrigley, adding girls to the team was always something that he was interested in.
“We actually had a girl on the team, and she was probably the hardest working kid on the team,” Wrigley said.
Wrigley leads the team, alongside assistant coaches including coach Martha Drone. The girls’ wrestling team has been practicing together with the boys’ wrestlers. From running on the track to weight training, the girls have been working on preparing for their season.
“They automatically have a chip on their shoulder,” Wrigley said. “When I first started coaching, girls wrestled against boys, so they had that chip on their shoulder where you could just see a girl wrestling in a boys-dominated sport. They had to work extra hard, and I love the work they put in.”
While the number of tournaments has decreased because of COVID-19, the team is still practicing. The girls have set goals for themselves, mentally and physically.
According to Tolson, wrestling has made a huge impact on her mentality, not just in wrestling but in life as well.
“This is definitely a mental sport,” Tolson said. “You know when I got home, it was my sister’s birthday and I wanted to eat a cupcake, but you know you have to have a strong mentality and say no.”
Fellow teammate Gurrola has a similar struggle mentally as well.
“Something mentally challenging was I can’t be nice during wrestling,” Gurrola said. “So when I practice I have to have my mentality to say, ‘OK, I don’t know this person, I have to wrestle.’ And that’s a challenge for me to do.”
According to Gurrola, her dedication to the team comes from her coach.
“When I saw how Coach Wrigley was dedicated to making a girls’ team, it made me dedicated to joining the wrestling team,” Gurrola said.
Girls’ wrestling has inspired and empowered both Tolson and Gurrola to try new things that some may not consider “normal.”
“I chose this because I want to feel strong and confident,” Tolson said. “This was something new for me, and I like going out of my comfort zone. I was always playing soccer and softball for a while, so I want to switch it up.”
Wrestling requires commitment not only to the team but the lifestyle as well. For Tolson, adjusting to this lifestyle has been one of the biggest difficulties.
“The diets are hard,” Tolson said. “Whenever I had a weight cut down to 155, I just ate two boiled eggs a day, which was pretty hard.”
According to the girls, they are looking forward to their season and showing off their progress.
“They’ve worked really hard to get this opportunity, and I’m super stoked to see what they do with it,” Wrigley said.