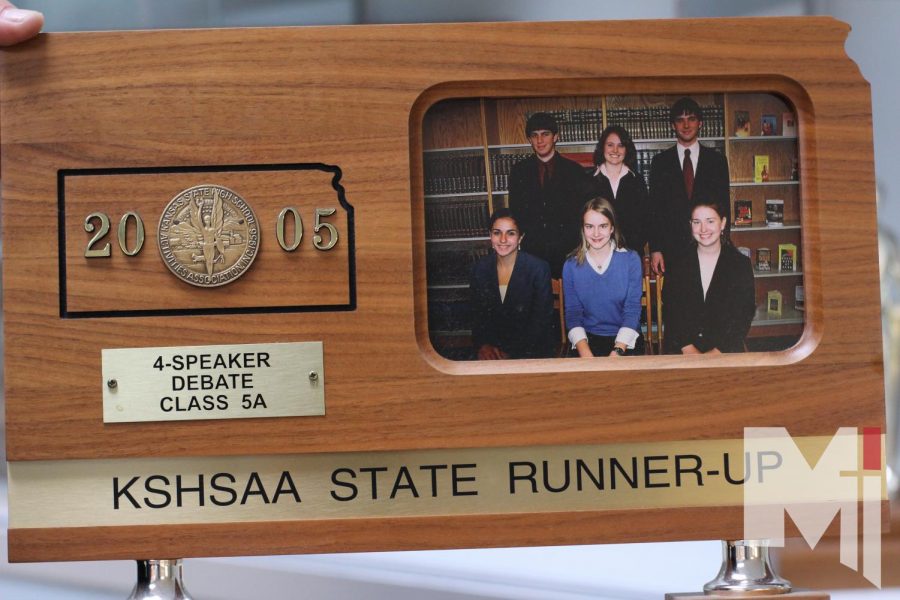 The early morning Saturday sun rises. The debaters wake up, dress in their business-like apparel and prepare for their debate.
Only this year, they are not traveling to another school. They’re going to Miege and debating through a platform similar to Zoom hosted by the National Speech and Debate Association.
Due to the global pandemic, high schools are debating online rather than in-person.
“During in-person debates, the atmosphere is more conducive to debating,” senior and four-year debator Julianna Rice said. “Having your opponent in the same room makes the debating easier.”
At times, debating online can bring technology errors.
“Sometimes the internet goes out,” Rice said. “Communicating with the other team or your partner is difficult if there are technological issues involved.”
The unexpected delays of technology bring flexibility to the debate.
“If they are giving their speech, it is kind of rude to interrupt,” Rice said. “You just have to go through with it.”
This year, a rule that has changed in debate is evidence sharing.
“It is pretty much compulsory that everyone shares evidence before you start speaking,” Rice said. “Last year, sometimes teams wouldn’t share evidence until after they gave their speech, but now everyone shares their evidence instantaneously with each other.”
Debating online allows the accessibility and use of the internet during tournaments.
“It is kind of a big thing,” Rice said. “Normally, you wouldn’t have internet access so you could only use information you prepared before the round. Now, we can look up new articles in the round.”
Online debate tournaments can bring relief to those who do not like public speaking.
“It is less nerve-wracking,” Rice said. “You are performing at a screen, so if you have issues with public speaking it is a little easier.”
According to Rice’s debate partner, sophomore Darby Sutherlin, not using paper is a change from her novice year.
“It is new using a computer for all of it and being on Zoom is a little weird,” she said.
The opponents of the debaters might be competing at their house, depending on their schools and COVID-19 restrictions.
“It is a little weird when you are dressed up in a pencil skirt and blazer and your opponent is wearing a T-shirt in their bed,” Rice said.
Sutherlin and Rice said they are missing some aspects of debating in person.
“When in-person, you can read [the judges’] responses and see how the judges are responding to your arguments,” Sutherlin said.
The host schools have lengthened tournaments due to time designated for technology errors and being online. Debaters arrive at school around 7 a.m. and go until 6-7 p.m. — making for 12-hour days.
“It is a lot longer with Zoom,” Sutherlin said. “It is a long day, but it is fun.”
Despite the changes this year, the squad still has the chance to grow in knowledge and form partnerships
“Debate is a lot of fun and I learn a lot through my partner because she is experienced,” Sutherlin said. “I am becoming a much better debater as I am debating with Julianna.”