KSHSAA votes to have winter season with changes 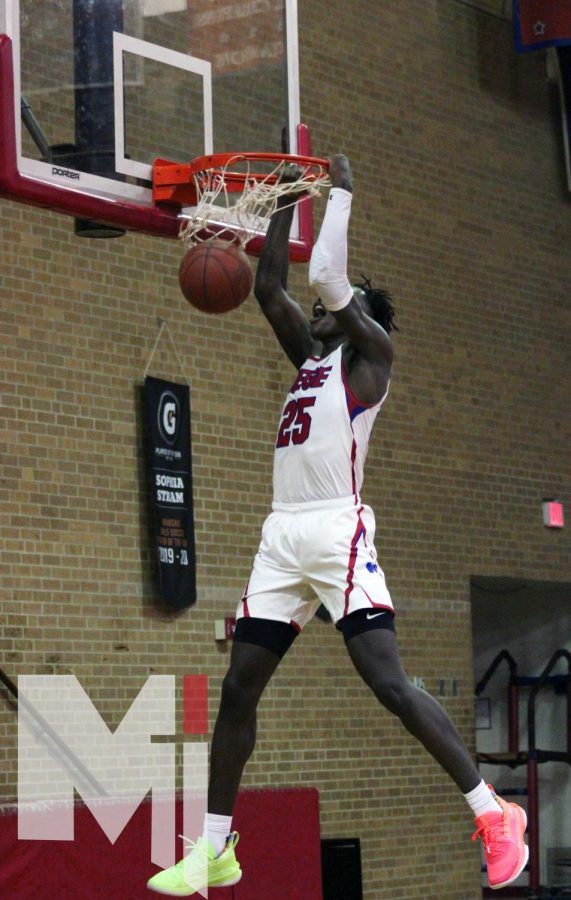 Junior Mark Mitchell goes up for a dunk for a 68-37 victory against Shawnee Mission North for the Stags’ first game.

When the fall sports season came to an end, senior Payton Verhulst was still unsure about the future of her senior basketball season.
“I had a few worries that there was corona going around, and I just wanted to have a season,” Verhulst said. “The biggest thing when we found out we were going to have a season was, if we had to wear masks because basketball is a sport [that]’s pretty dire that you need to be breathing well. So I think it’s been a pretty big barrier for us in a game and in practice.”
On Nov. 25, the Kansas State High School Activities Association board voted that the season will not be postponed, but will have a longer Christmas and New Year’s break. The board voted 53-22 to resume the start of the winter sports season, but agreed for a dead period starting Dec. 23-Jan. 7.
Boys’ and girls’ swim coach Kat Kennedy said she is pleased to know KSHSAA is taking the right precautions to allow a season.
“In my mind, it was we got to have a season or we didn’t and so the fact that we do get to still have a season and compete, I’d rather have that than nothing at all,” Kennedy said. “I’m not going to get greedy with what I asked from the organization that’s trying to keep the whole state in mind.”
Every time an athlete steps on the court, mat and the aquatic center, there is a risk of being exposed when coming in contact with the opposing team, coaches and officials. Athletic Director Andrew Groene said he believes KSHSAA is helping the athletes stay as safe as possible during the 2020.
“I feel comfortable with teams competing, With the safety measures put forward by the school and the coaches, our athletes are as safe as possible while still being able to compete,” Groene said. “Many people forget our student athletes are at risk for possible injury any time they play their events. Concussions, muscle and bone injuries, etc., are still out there.”
Much of what the athletes were used to in previous years has been altered for a safer environment to keep them healthy.
Junior swimmer Blake Allen said that swimmers must wear masks up until the point they are about to take off for their race.
“Then after we swim our race, we get right out of the pool and put our masks right back on, even though they might be wet and have water all over them,” Allen said.
On Dec. 8, KSHSAA overruled the ruling that stated there will be no spectators at the beginning of the season until Jan. 28. The amended proposal now allows each participant to have two guardians in attendance.
The girls’ basketball team was the first team to experience the amendment that ruled that there would be no spectators at all.
“There was definitely a different atmosphere knowing that nobody else has played like that before,” junior Emajin McCallop said. “It was definitely weird, and it didn’t really have the energy that games from the past had.”
The girls’ team was also the first team that allowed two spectators for each participant when the amendment was changed.
“With our second game, which allowed two spectators for each participant, not only was it comfortable because now our parents were there and we could see them, but there was a bunch more energy throughout the players and fans,” McCallop said.