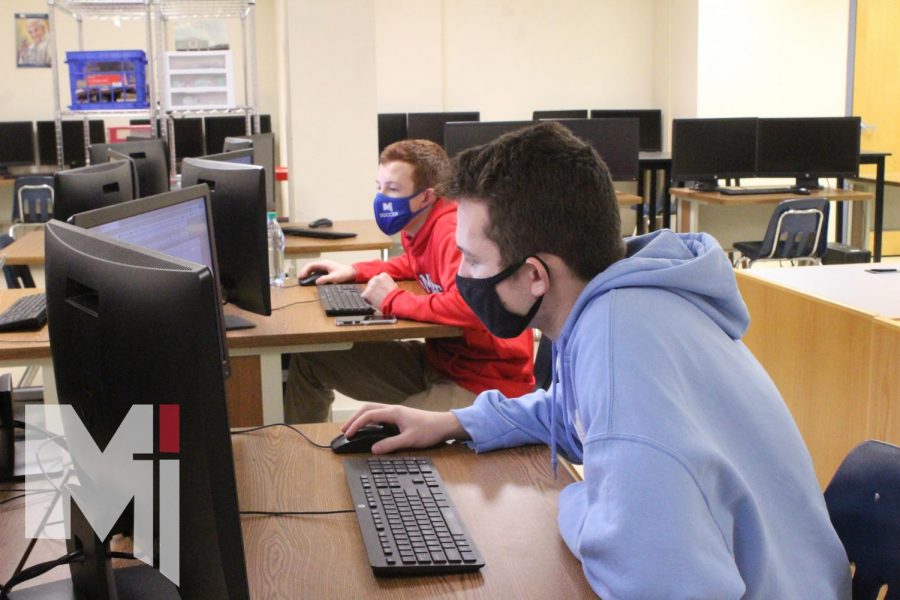 Freshman Patrick Watson and junior William Watson log onto their computers on Jan. 14 to compete in the cybersecurity challenge. Every Thursday, the STAGS Who Code club meets to learn new programs and compete in the competitions.

The end of the day announcements echo over the intercom. Students go their different ways throughout the hallways to their cars, sport practices and clubs.
Every Thursday, the STAGS Who Code club meets to learn and conquer the cybersecurity challenge.
Students logged onto their computers and joined their teammates. To begin the competition, STAGS Who Code mentor Joan Gladbach led the group in a prayer and wished them luck.
“Good luck,” Gladbach said. “May the force be with you.”
Student’s eyes were locked and their minds were concentrated on the bright computer screens. The room was silent with scattered noises from the clicks of keyboards, computer mouses, and murmurs to oneself. There was talking between group members in between gulps of water.
As the students were focused on their competition, Gladbach opened a bag of popcorn and a box of rice crispy treats for the coders to enjoy.
Throughout the school year, students in STAGS Who Code have been working on the cybersecurity challenge. During the challenge, students stay an hour to an hour and a half after school.
“It is really just as long as we can go until we either figure everything out or can’t figure everything out,” freshman Luke Frenzel said. “Normally, it is just as long as it takes us to finish.”
Each week there are different tasks. Some include cryptography and analyzing log data.
“It is a lot of brainstorming and solving problems,” sophomore Finnegan Stocks said.

During competition days, the coders compete in a group of four against different schools from all around the world.
“We were working through problems that we learned the week before, like how to solve them,” Stocks said.
In addition to the cybersecurity challenge, students gain knowledge in programming.
“We learn about how to use different programming languages and how to interact with different programs,” Frenzel said.
Both Frenzel and Stocks joined STAGS Who Code with the encouragement of Gladbach, who teaches them in a class. Trials come with coding, but that’s something that Stock enjoys.
“I like the challenge and learning about different things,” Stocks said. “I look forward to learning about cybersecurity.”
For Frenzel, the team aspect is a particular detail that he appreciates.
“You work as a team,” Frenzel said. “I like how you work with your team to figure things out that you couldn’t just figure out on your own.”
Frenzel adds that for those wanting to join STAGS Who Code should not be worried about catching up.
“Just do it,” Frenzel said.