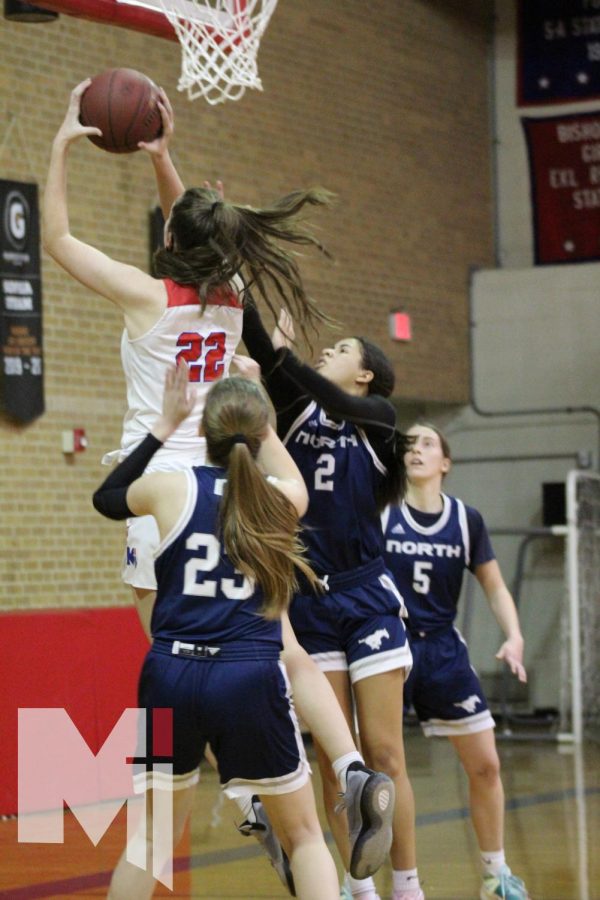 Going up for a contested layup against Blue Valley North, senior Payton Verhulst helps lead the Stags to 67-41 victory.

Due to COVID-19 ending the season last year short, the girls’ basketball team came into this season with a score to settle.
Junior Allie Burns said she felt frustrated with the way last season ended and, with the rest of the team, is playing this season with an extra bit of motivation to win a state championship.
“Last season we felt like we were robbed of a championship because the tournament was canceled when we were in the semifinals,” Burns said. “We are just trying really hard to stay healthy and finish strong with a state championship.”
Playing in a season that can be halted at any point due to the coronavirus means that players have to be extra vigilant of their health.
“We have to be extra careful of what we do so there is not an outbreak, so we are putting in more work than in a regular season to stay safe and keep our season going,” Burns said.
Senior captain Payton Verhulst said that she wants to give the younger players a strong appreciation for the sport and a better opportunity to succeed.
“The biggest thing I want to leave for the team next year is just to be thankful for every moment you get of high school basketball because it flies by so quick, and I make sure they just always give their best effort and leave it all on the floor,” Verhulst said.
The athletic success at Miege gives another challenge for each team to continue the legacy and success. This is especially clear for the girls’ basketball team, which has won 21 state championships since coach Terry English started.
“At Miege, I think the amount of success we have at all sports and activities is underappreciated because it’s expected here,” Verhulst said. “It’s a lot to live up to, but I wouldn’t want it any other way.”
The team, according to assistant varsity coach Jeff English, is maintaining a 4.1 team GPA throughout the season. He said he is proud of the team on and off the court.
“Being able to concentrate on their grades like they do and be so successful out on the basketball court is a pretty awesome accomplishment for those girls,” English said. “We demand a lot of our kids. We put a lot of effort into it as coaches, and we know that our girls put a lot of effort into it as players. They do such a great job of being coachable and being responsible for the things we ask them to do.”