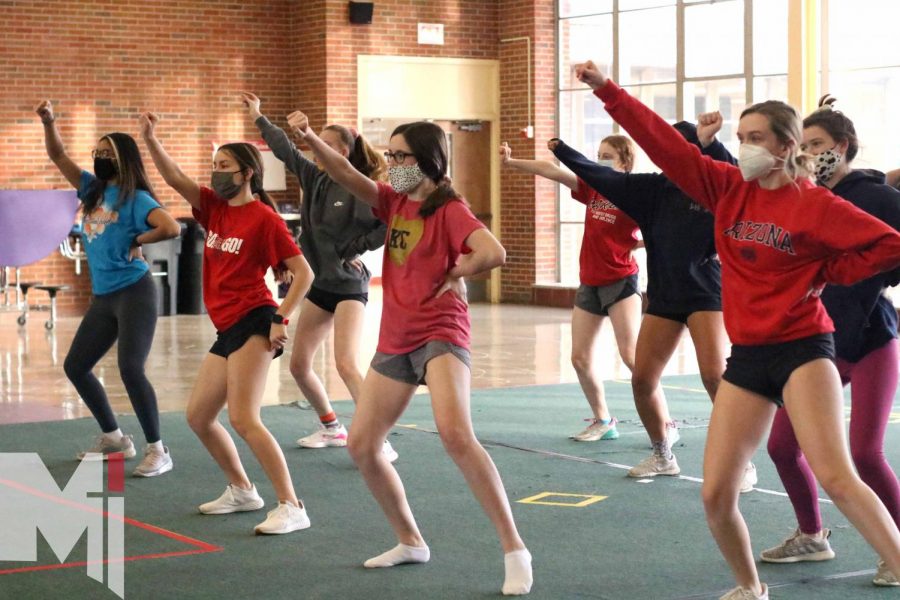 Kick lines, partner work and stunts – these are a few of the things that spectators won’t find in this year’s cheer and dance routines. Split squads and distanced dancing will be what winter sports attendees can witness this season.
The Miege dance and cheer teams have found new, alternative ways to practice and compete through COVID-19. Throughout their season, they have encountered things, like online competitions, that have impacted how they present themselves.
In the 2020-2021 seasons, both the dance and cheer teams were faced with new guidelines and restrictions in response to the global pandemic.
“Since COVID-19, practices are shorter, masks are hard to wear while dancing and we have to be 6 feet away on the field, which can ruin the effect while we’re dancing,” senior Andreanna Edwards, dance team co-captain said.
The squads are still able to attend games but there’s a catch: the cheer squad’s routines are missing some of the movements that were commonly found during the winter season.
“A big difference for cheer is that we have to do a split squad for basketball games because we are only allowed to have 8 cheerleaders,” sophomore Ana Gajewski, varsity cheerleader and dancer said. “We are also not allowed to stunt, which is very sad especially during basketball season because we focus on stunting a lot more.”
Another difference due to coronavirus restrictions are the competitions. The dancers and cheerleaders both competed at state this year; however, the competition was completely online, which had never been done before.
“This year’s state was done virtually, so we recorded our performance and submitted it online to be judged by KSHAA,” assistant dance coach Natalie Hogue said. “We performed our fight song, a band dance — which is what we would do for a pre-game or sideline dance — and a performance routine, which is similar to what we would perform for halftime.”
The girls had mixed reactions about state being virtual, but they were still happy to be competing this season.
“I think that I would have enjoyed state a lot more if we were able to perform in front of judges instead of a camera, but I’m still grateful that we could compete,” senior varsity cheerleader Emma Ryan said.
Two weeks after state, the teams discovered their placements. The cheer squad received 4th and the dance team received 14th overall.
“We didn’t receive the placement that we were hoping for, but overall I enjoyed state because it was fun to bond with everyone and enjoy the dances we choreographed,” freshman varsity dancer Ainsley Murray said.
Throughout the years of competing at state and at other local competitions, the girls have acquired good luck charms that they carry with them for support. These charms range from clips, to pennies, to ribbons.
“The penny is in my bag at all times and it always gives me good luck.” sophomore Dina McElwee said. “I found it on my birthday while walking to a restaurant, and the penny happened to be of my birth year so I took it as pure luck and have carried it ever since.”
Throughout the season the girls have gotten to know each other and have been able to attend events, even though it is not in the traditional way.
“We have been able to be a part of football and basketball events, participate in assemblies and I have gotten to know the new girls on the squad each year,” Ryan said.
According to Gajewski, the cheer team has grown closer together and they have been able to focus on their technique and choreography.
“We have taken this time that we aren’t allowed to stunt to really focus on our cheers and just having very clean and sharp motions,” Gajewski said. “We have definitely grown and become stronger because we were completely focused on our sport.”