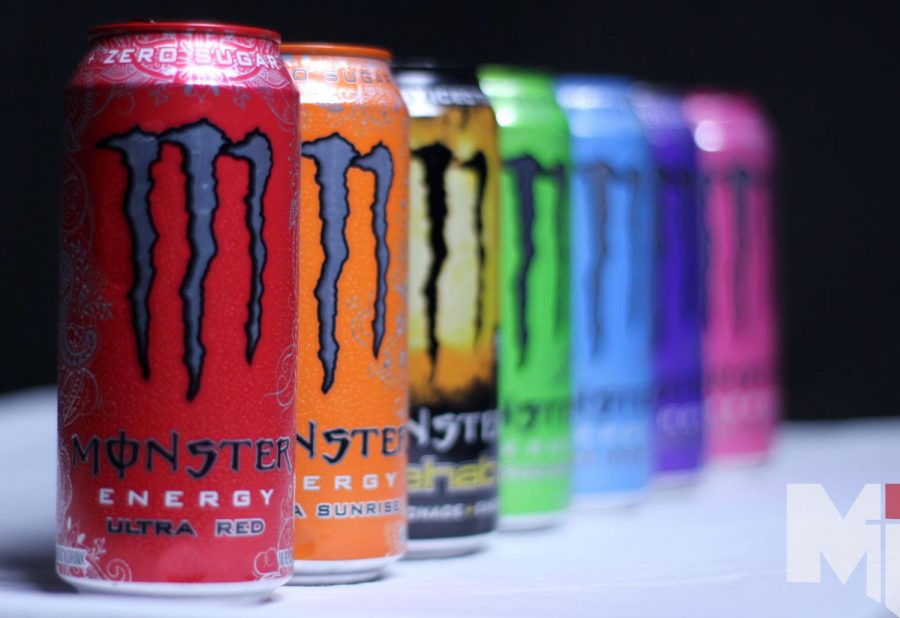 Caffeinated beverages like Monster energy drinks are a popular source of energy among students. According to a survey of Miege students, caffeine consumption varies from a few times a week to several times a day.

There are two types of people in the world: early risers and … not early risers. For the latter, the very first step of waking up in the morning can prove to be incredibly difficult. Students like senior Elizabeth Ruiz turn to a solution that is sure to give them the energy boost they need: caffeine.
“My main source of caffeine is just homemade coffee, and I have it usually once a day or maybe two cups on the weekend,” senior Elizabeth Ruiz said.”There are for sure downsides to coffee, such as that I hit the wall once the caffeine wears off.”
It is true that caffeine can affect health, sleep, and attitude, and the temporary effects of it can be both positive and negative to students. On one end, according to Live Science, there’s evidence that caffeine can help improve memory and boost concentration.
“Last semester, I was in AP Government and Politics, and I had to stay up super late,” Ruiz said. “It just helped me stay awake for a few hours and be productive and focused.”
For students especially, the early-morning routine can sometimes be demanding, especially if they have homework, extracurriculars or any other activity that calls for an early start. Consequently, many turn to caffeine to ease along the morning.
“I have a bit of a caffeine addiction,” sophomore Maggie Noblitt said. “I don’t like coffee because it makes me anxious, but I love energy drinks. When I am filled with energy, I get on a roll and get things done.”
Of course, consuming energy drinks eight or more times a week like Noblitt does can have consequences that can greatly influence health.
“Drinking a lot of Monsters does catch up to me sometimes, and I crash,” Noblitt said. “Because I drink Monsters so often, when I don’t have one I can also get migraines.”
Caffeine can easily become an essential part of daily student life. However, while there is a sizable amount of students who drink caffeine often, there are just as many teachers and students who limit their intake. According to an online caffeine survey of 132 Miege students, about 17 percent of students don’t have any caffeine at all.
“Drinking coffee is fine to an extent, but I wouldn’t drink it every day,” math teacher Taryn Frank said. “Whether you drink coffee a lot or a little, always do it in moderation.”
Caffeinated beverages may be a must-have for many students and teachers, but others who don’t share their perspective have their reasons for choosing other beverages.
“I feel like if you have caffeine regularly, and then one day you don’t have it, you will have less focus and studying will be harder because it can be addictive,” senior Sarah Perico said. “Alternatively, I think the best way to get energy is sleep.”
Although caffeine is a quick and easy way to speed up the body or brain, consuming caffeine too often can sometimes lead to health consequences. These potentially harmful side effects can vary from student to student.
“I’ve seen students get headaches, be jittery, have their heart racing, or get stomach aches after drinking too much caffeine,” nurse Malisa McEachen said. “When it comes to energy drinks, the amount of caffeine is very high. Drinking several can have negative effects such as caffeine toxicities.”
The repercussions of too much caffeine can lead to negative performances in academics, sports, or extracurricular activities. Especially if there is a certain level of dependence on caffeine, the toll that it can take on students can be dangerous.
“I’ve seen a student who had all those side effects from too much caffeine.” McEachen said. “He got no sleep, so in the morning drank several Bangs. He ended up feeling absolutely horrible from it.”
While it is true that too much caffeine can have harmful effects, this doesn’t mean that all caffeine is bad. Alternative energy sources or a limited intake of caffeine can still produce a healthy, energized lifestyle.
“Not overdoing the caffeine can make the mind more alert, and there are even studies about physical enhancement due to caffeine,” McEachen said. “In moderate amounts, caffeine has its benefits.”