Upperclassmen dance will occur despite virus 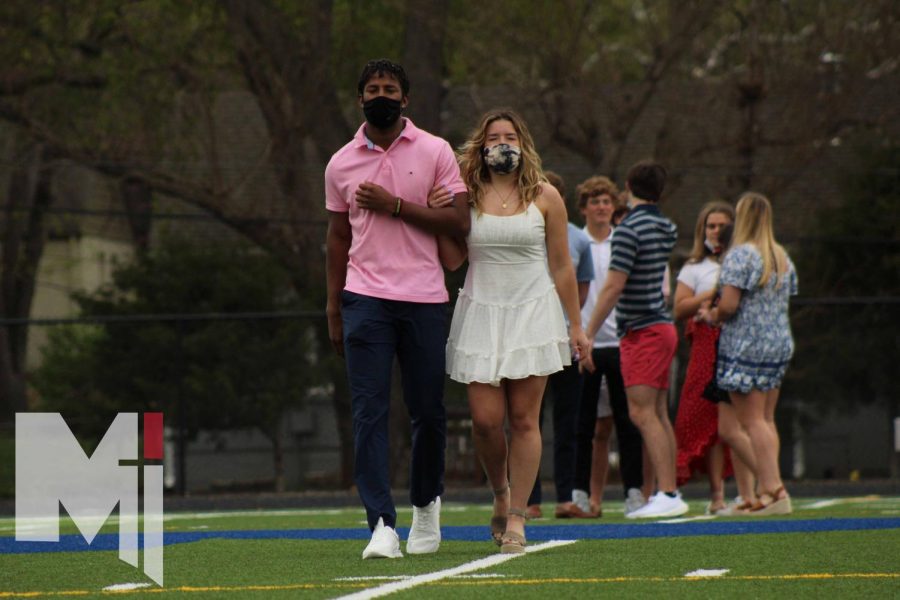 Seniors Timmy Dorsey and Layne Fortin are introduced as Prom Court nominees as they walk down the field. The 2021 Prom Court has been expanded to 14 seniors, to make up for the lack of Sadies Court this year.

The question “Will we have Prom this year?” was replaced with “Will you go to Prom with me?” when the school announced that Prom will take place this year. It will be the first Prom for both juniors and seniors, since last year’s was cancelled.

Administration has made several changes to allow the dance to happen this year.

“Since we did not have a Prom last year, I am not exactly sure how different this will be,” senior Ayden Greene said. “From what I have heard is that it usually is at a place other than Miege and they serve food. This year because of COVID guidelines obviously, it is taking place at Miege and instead of food, there will most likely just be some snacks.”

Science teacher Angela Lueckenotto is in charge of most of the organizing and planning for Prom, and the Mother’s Club is helping with decorating. Lueckenotto said there will be a portable photo booth trailer or a “selfie station” instead of a professional photographer, since people did not use the photographer in the past.

“[Having Prom] means everything,” Lueckenotto said. “It’s so exciting, and we’re thankful that we’re getting to have it at all since we didn’t get to have one last year.”

The lack of Prom last year especially affected the class of 2021. Instead of having two years of Prom, they only have one, and according to, Greene, they are nothing but grateful.

“The seniors are very excited that we get to have our Prom this year since last year was canceled,” Greene said. “It’s just kind of a high school thing so I think we are all excited to get the experience.”