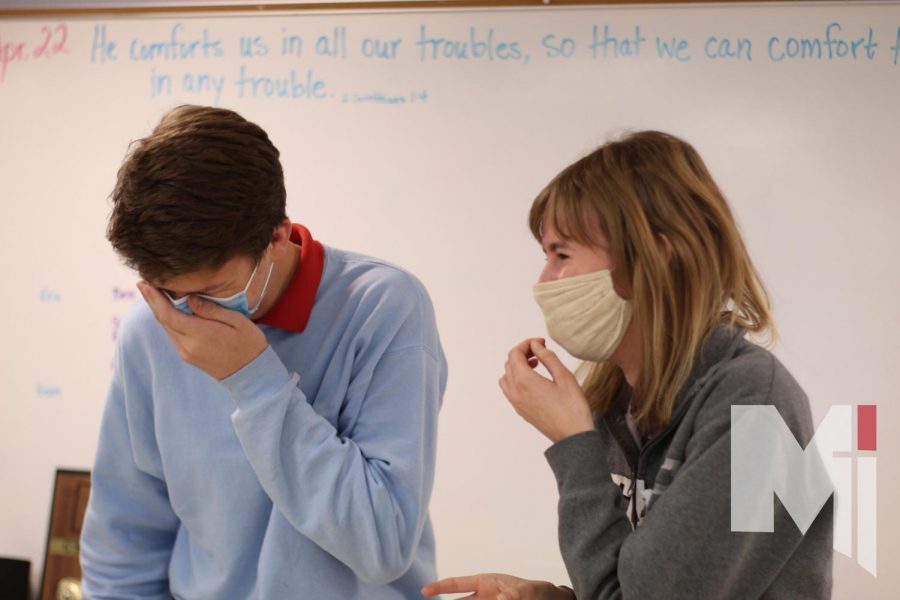 Junior Paul Ruf and Senior Maizie Young perform in forensics. According to Young, forensics can be unpredictable, but fun.

Memorizing speeches, buzzing timers, and unrelenting judges- the forensic squad is no stranger to difficult circumstances. This year, the team will be participating at state on May 1.

Reynolds usually prepares her team each year for state year in her unique way.

“Usually, the first step is deciding the entries from each student,” Reynolds said. “More people qualify than we can take, and I always try to be as fair as I possibly can be.”

In class, Reynolds has her students help one another by giving helpful advice and by observing other students.

“Each year, when I have kids going to state, we rehearse as much as possible,” Reynolds said. We also videotape and do class critiques to refine each piece,” State competitions will look different this year due to COVID 19 restrictions.

This year, state will be all virtual. It will be the same format as tournaments have been – 3 preliminary rounds, semifinals, and then finals. It will be located at Miege, and each entry will be performed in a separate classroom via Zoom.

Regardless of the struggles that the team has faced this year, the forensics team has remained supportive of one another.

“My favorite part of forensics is watching the kids in the squad being so supportive of one another’s accomplishments,” Reynolds said. “Everyone is excited when another person does well. The upperclassmen are proud of the underclassmen, and it’s a positive environment.”

Senior Mia Putnam will be attending the state tournament this year and will be participating in Informative Speaking and Original Oration. Putnam is preparing by practicing her pieces until she has them memorized.

“I do what most forensics kids do when they have a speech to give,” Putnam said. “I say my speech to a wall until I’ve got it down,”

Putnam said performing virtually is challenging without the in-person element.

“Performing in front of a screen is so much more difficult than people think,” Putnam said. “Sometimes the judge’s camera is off, and sometimes the sound quality is bad. It’s been difficult keeping up with the performative aspects of things,” said Putnam.

Despite the many questions and concerns of this year, Reynolds said she has high hopes for her state team this year.

“I am optimistic about the state entries,” she said. “I have put together a strong team, and each person performs to their talents extremely well.”