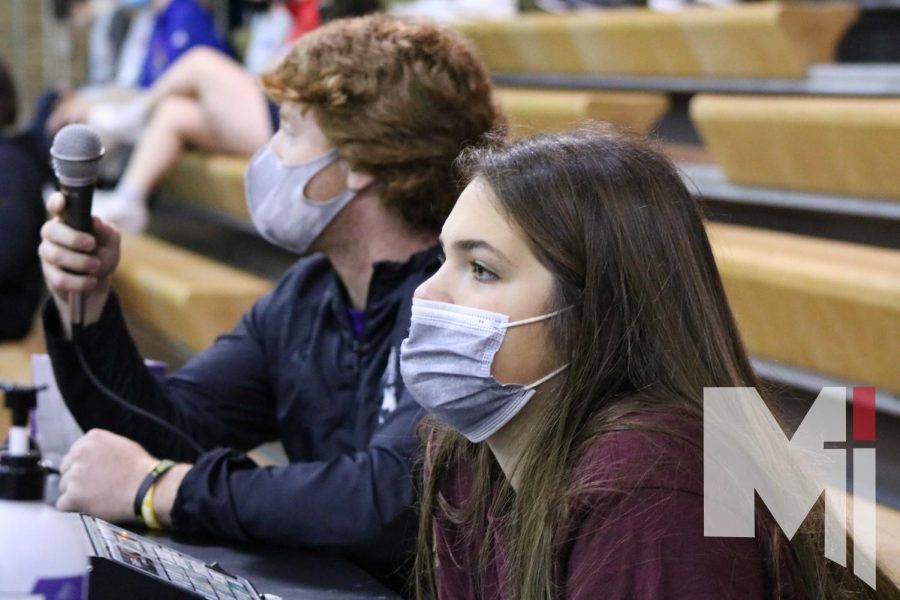 Juniors Jacob Welsh and Lizzie Weixeldorfer observe the relays on herd day while keeping score and commentating. Both Welsh and Weixeldorfer won executive for their herds.

As the 2020-2021 school year comes to an end, the time of the eight current herd executives does too. Each herd member had the opportunity to vote for the junior they believe will lead their herd to success, and they did just that.
The student body voted for the new executives on April 19, and they also viewed the videos the candidates put together to campaign.
“I wanted to become an executive because I wanted to follow in my brother’s footsteps and wanted to make a lasting impact on the Rost Herd,” junior Lissy Fahlstrom said.
In some herds, the race for executive was so close that candidates lost by only one or two votes, according to the herd coordinators.
But in other cases, such as the Sister Martina, Reardon and Perrini herds only one junior ran for executive.
“I was nervous during the election because I knew it was a close race between me and Will [Anderson],” said junior Emily Lynn of the Millie Herd. “It’s also really nerve-wracking to put yourself out there like that without knowing what the outcome would be.”
Just like the year 2020, this year’s election was a memorable one. The original election date was April 16, but due to a system error that allowed seniors to vote, eligible students voted again three days later.
“The re-election made things very stressful, and I was still very nervous because I had to wait longer to hear the outcome,” junior Tylicki member Jacob Welsh said.
On April 23, the newest herd executives were put to the test while organizing a day for the entire school to participate for herd points.
“Organizing herd day and helping out was kind of hectic and it included a lot of spot-on thinking, but overall it turned out great,” said junior Lucas member Blake Allen, “It was both stressful and exciting, probably more exciting though just because it was my first time getting to help out with everything.”
While the most recent herd day was just a sneak peak to their senior year, the newest herd executives received words of wisdom by the current executives.
“My current herd exec, Ayden Greene, has just told me to make sure everything is communicated between the students and the teachers,” junior Reardon member Allie Burns said, “Make sure everyone can participate in some type of activity and make sure everyone has a good time.”