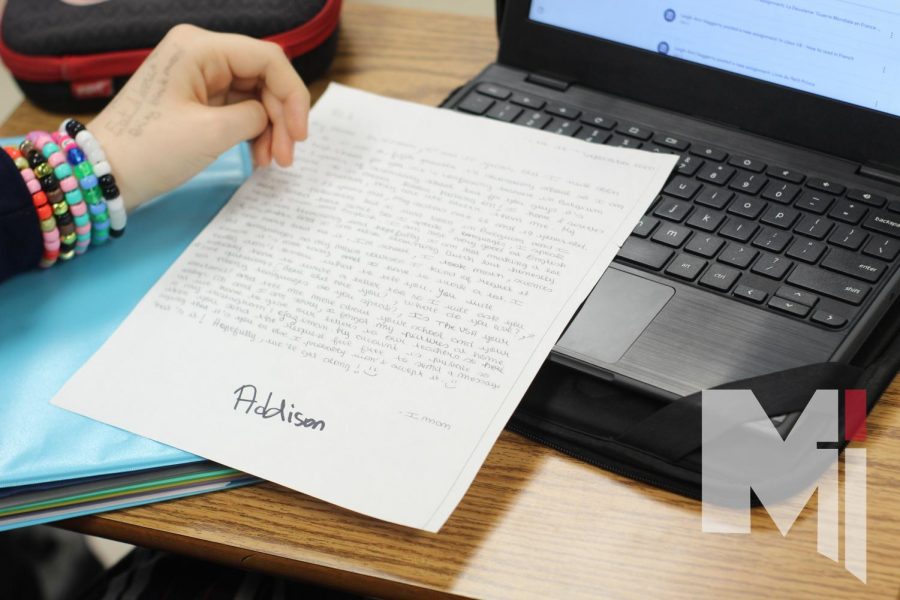 During her French III class, junior Addison Summers reads a letter from her pen-pal. Her pen-pal, Iman, introduced herself and talked about her life in Belgium.

Each student in French III sat down at their desks before French teacher Leigh-Ann Haggerty began to pass out envelopes. The entire room buzzed with excitement as students opened their first letters from their pen-pals.

This program started last year after Haggerty contacted another teacher in Belgium after seeing a post on a Facebook group looking for English-speaking pen-pals.

“It allows students to have real interactions with real people who speak another language,” Haggerty said.

Communication is the biggest part of this program, according to Haggerty. The French students exchange letters, send presents and have even made a group chat with all of their pen-pals. All upper-level French classes participate in the pen-pal exchange. Haggerty sends the class in Belgium the Miege Weekly every week as well.

“They see the Miege Weekly and they’re like, ‘You guys are living like ‘High School Musical,’’” Haggerty said.

Haggerty and the Belgium teacher have also become friends along with pen-pals because of this program, according to Haggerty.

“I sent her a birthday present because she turned 50 and sent her a Miege sweatshirt along with some other things from America,” Haggerty said.

Junior Addison Summers has also become close with her pen-pal over the course of her two years in French class. According to Summers, she never would have done something like this outside of school.

“My pen-pals name is Iman and she is Pakistani and she has lived in Belgium her whole life,” Summers said. “When we first got our pen-pals, I thought it was super exciting because it was a chance to make a new friend with someone I would have never normally talked to.”

Miege will be hosting a trip to France over the summer. According to Haggerty, the summer trip to France is open to all students but highly encouraged for those in her French class participating in the pen-pal program. Summers looks forward to the opportunity to practice French and meet her new friend.

“We are going to go to France for about a week and then go to Belgium and stay with our pen-pals, like staying at their houses,” Summers said. “We are planning on going right before they get out of school so that we can go to school with them one day and then explore Belgium with them.”

Summers is excited for the trip but mostly enjoys the immersion she gets from speaking with a native French speaker. The most fascinating thing for her is the difference between native French and the formal French learned through Miege.

“I think one of the most interesting things is that French typing slang is super fascinating because a lot of French words are really long, so they abbreviate most of them when they are typing,” Summers said. “It’s really interesting to learn some new French-speaking vocabulary rather than the formal French that we are taught at school.”

Haggerty is looking forward to her students getting more experience not only with the language but the world around them. The success of the program comes from the human interaction between the students and their pen-pals.

“I think it’s such a great way to understand other people’s perspectives and to celebrate diversity and how we are all the same no matter where we are in the world,” Haggerty said.