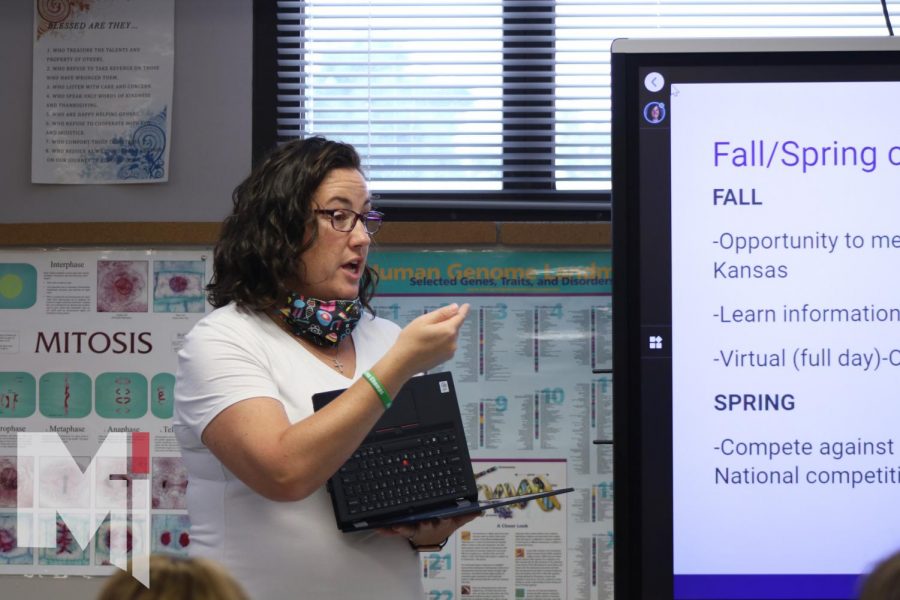 During the first club meeting, Summers presents to new club members. She presented HOSA's conferences, which are hosted in the fall and spring.

Discovering what life looks like after high school was an important moment in junior Clare McLellan’s life. With thousands of career paths to explore,she was left wondering how to get familiarized with the path that she was interested in. By taking on the role of HOSA club founder, McLellan showed her interest in a career in the medical field and introduced a new club designed to help students conquer their career dilemma.

Many classes can correspond with majors, including culinary arts and engineering. However, according to science teacher Mary Beth Summers, students found that there were not any options for those interested in the medical field.

“I’ve had so many students talk to me about being interested in nursing or wanting to become an EMT, or a physician, but we don’t really have anything here that helps give those students exposure to those different types of health careers,” Summers said. “They always have questions about what it takes to become a nurse or a physician and I can try to answer the best that I can.”

This led McLellan to research ways for high schoolers to get involved in the medical field and bring the club to Summers.

“I’ve always had a good relationship with her, and I figured that she would find it to be interesting and something that would benefit Miege and a lot of students as well,” McLellan said.

HOSA is a nationally recognized club, which means the club can provide a number of opportunities, like conferences for students, but it comes with its own set of responsibilities. To be a recognized school, at least five students must pay $17 and the adviser has to register with a state representative. The school is then qualified for the conferences, which many students are excited about getting involved in, according to McLellan.

“I am most excited to see what it’s like, if we’re able to go, because it’s a new experience that Miege hasn’t done before,” McLellan said.

Even though the club is new, Summers says she still has a strong plan on how to keep students engaged and how to make sure that each student’s interests are valued.

The students filled out the survey from the first meeting and from there Summers researched professionals from this field. The first speaker who spoke to the members was a cancer research scientist from the Kansas University Medical Center.

“I thought she was really cool when she was talking about her background in journalism,” McLellan said. “I thought it was cool how she was still able, even after college, to find her calling in cancer research and it reminded me of my mom.”