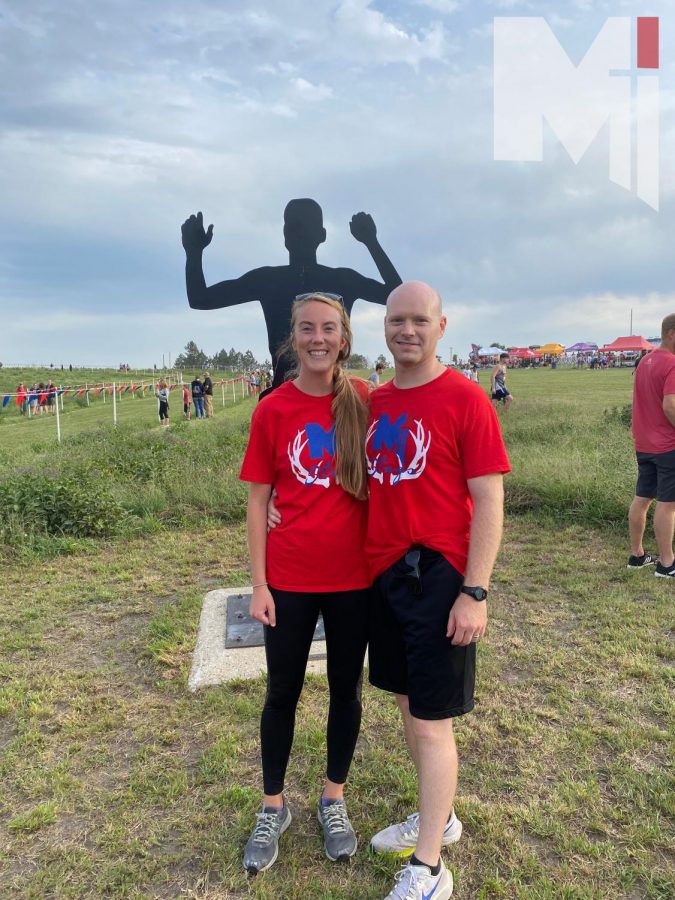 Posing for a photo, Mr. and Mrs. Verschelden smile together for the picture. This photo was taken while they were coaching at a Cross Country meet.

The sound of music carries across the field as the cross country team runs their warm-up mile. A similar thing can be heard at the beginning of tennis practice, music flowing throughout the courts as students practice swinging.

Both of these teams have one special thing in common: their coaches are related.

For the Verscheldens, they did not become family coaches until after they began working together. According to English teacher and cross country coach, Maggie Verschelden, they first met through coaching at Miege before they got married.

“We were friends after coaching for a while before we started dating and got married,” Verschelden said.

“I had been trying to get her to help for a couple of years cause I know she knows tennis really well so, after the first year when we needed a new coach, I asked her over the summer,” Groene said. “I think things just worked out where she had stopped working the job she was working and had some free time, so she said yes.”

Being related has some benefits for both sets of coaches. According to Groene, it’s growing up doing the same stuff in tennis practice. For Verschelden, it’s communication.

“We are obviously really good friends so we communicate well and play off of each other really well when talking to the team,” Verschelden said. “I’d say it feels more like coaching with an excellent friend rather than coaching with my husband.”

Verschelden is a new teacher at Miege this year, which has left her with little downtime. According to Verschelden, it’d be hard to get quality time together without coaching together. A bonus is being able to enjoy a sport they both love as well.

“I was really excited [to coach full time with my husband] because during the cross country season it’s a lot of time and to be gone at school all day then coaching,” Verschelden said. “Now we get to spend time together and do this thing that we both love to do.”

Groene also shares this same sentiment with his sister. According to Groene, although they only live 30 minutes away, it is almost impossible to see each other often without coaching.

“It is a long-distance when we have kids so I get to see her more often and communicate with her as well,” Groene said.

Even though there are many benefits, not all parts of being family while coaching are positive; according to Verschelden, a recent incident with the cross country team created a slight conflict between her and her husband.

“We had to be in charge of the team a couple of weeks ago because our head coach got COVID-19, so that was a little bit hard,” Verschelden said. “We had to communicate more, and we butted heads a couple of times.”

According to Groene, it is easier to communicate these differences in opinion because they are siblings. Knowing more about fellow coaches is essential to someone directing a team.

“Since she does things differently than I do and because she’s my sibling, I can voice to her more,” Groene said.

For Groene, the best part is being in control for once.

“I like to joke around with her since she is my older sister, being the head coach kind of makes me the boss, so it’s fun to be in charge of your older siblings now that the tides have turned,” Groene said. “I enjoy it and I know she does a great job.”

According to Groene and Verschelden, they are both happy they have this opportunity to work with their family to make the teams as strong as they can be.

“I’m very thankful that she was able to say yes to helping out a couple of years ago, and I’m glad she’s helping out this year as well,” Groene said.