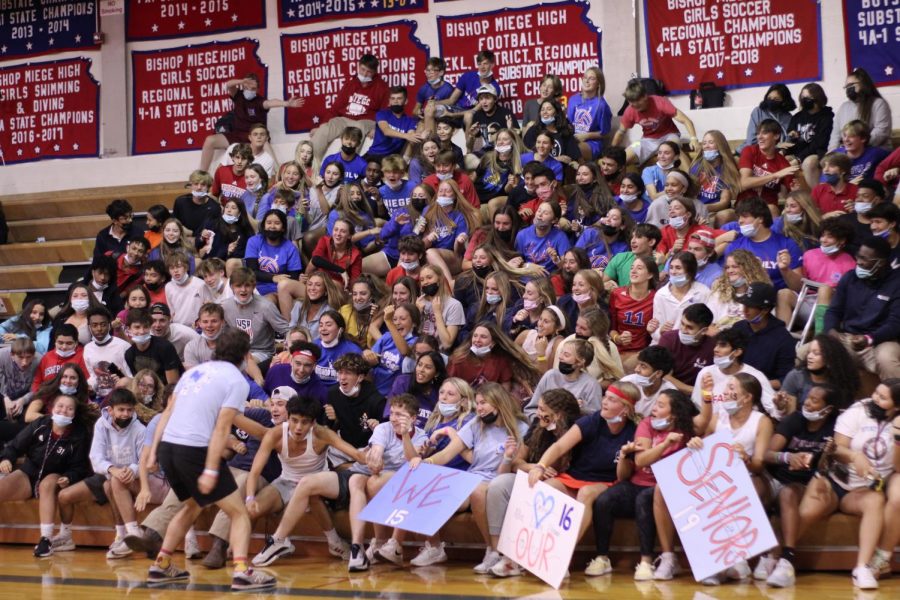 Together Again Leading the crowd in a pregame rollercoaster chant, senior Matthew Mohler gets them ready for the start of the girls volleyball game. The student section was filled for the pack-the-house event on Sept. 22 which ended in a 3-2 loss to St. Teresa’s. | NATALIE MARTINEZ

With crowds back in full capacity at indoor and outdoor sports coaches and athletes receive and feed off of the energy that comes from the home crowd.
Compared to the limited student sections of last year’s football games which only held seniors and at times were empty, this year’s crowds have brought a much better feeling to the game, according to senior football team captain Collin Keeney.
“It definitely helps you on the field, because you just feel the energy,” Keeney said. “Last year, it was honestly kind of depressing. We could be blowing a team out or be down 14, and it would feel the exact same because there was never any hype or craziness coming from the crowd.”
After a year away from events, students seemed to be ready to get back to cheering on their teams. Keeney said he has noticed a difference in the loudness of the crowd this year compared to two and three years ago.
“It’s a lot crazier, people haven’t been able to do it in two years, so now they’re extra hyped and going extra hard which really adds to how we feel on the field,” Keeney said.
Another football team captain senior Jacob Welsh said with the return of crowds the football team feels the excitement that comes from a big play and the school spirit that emanates from the crowd.
“Whenever we make a big play on offense or defense, it’s huge to see and hear the crowd go wild,” Welsh said. “It’s awesome to hear the crowd after a huge stop. It’s something we didn’t get last year that we missed out on.”
Similarly, volleyball players like to use the energy of the crowd while on the court and couldn’t do that with very limited students allowed outside of family at indoor games last fall.
“Last year, we pretty much had no fans and we had to wear masks, so creating our own energy was really tough,” senior volleyball player Allie Burns said. “You want to perform better in front of a crowd, so when the entire gym is filled with the energy, it helps us perform.”
As well as helping the team’s performance Burns said it helps the team feel more comfortable while at home games and keeps them in a positive mindset even when losing.
“It really encourages us when we hear the crowd cheering when we do something really good,” Burns said. “When we go behind, it doesn’t really bother us as much when the crowd is still in the game and cheering us on.”
The coaches also recognize the intensity the crowd can provide to the players on the field and felt that its impact was sorely missed because of last season’s COVID-19 restrictions against fans attending sporting events.
“When they look back there and see a student section full from the bottom to the top, that motivates them,” head football coach Jon Holmes said. “Last year was tough, not being able to play in front of their fans and their friends. That’s one thing that excites us because we realize the home-field advantage we get with our students.”