Sign of the changing times: Students able to attend concerts again after pandemic 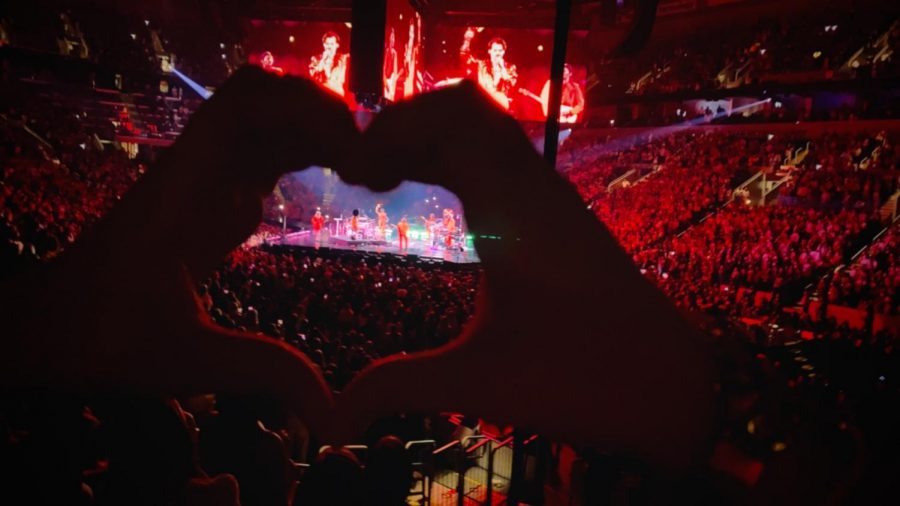 Hurrying to their seats, juniors Elizabeth Hansen and Maggie Noblitt joined the excited crowd of fans waiting to see Harry Styles perform live in concert. They attended his St. Louis performance, part of his “Love On” Tour.
Hansen and Noblitt are part of the 13% of students who have attended a concert recently, according to a survey of 143 students.
Due to the pandemic, many concerts had to be canceled or postponed, like Styles’ tour, which was originally scheduled for 2020. According to Hansen she got tickets her freshman year.
“I’ve waited two years,” Hansen said. “It was so worth it.”
Both Hansen and Noblitt have not seen Styles in concert before, but have attended other concerts before the pandemic. Because of their limited time to get through the merch line and to their seats, Noblitt said it was hard to focus on all the differences at first.
“It was a little weird seeing everyone with masks on because I didn’t expect it,” Noblitt said. “I know there are going to be people who are going to break the rules, but everyone was so respectful.”
Noblitt and Hansen agreed that the COVID-19 rules made the concert different from previous ones and that they saw everyone following those rules.
“The Covid restrictions weren’t super intense or anything,” Hansen said. “Masks were optional, but you either had to bring your vaccination card or have a negative COVID-19 test. It was actually pretty cool that masks were optional, but I don’t think I saw one person without one on.”
According to Hansen, although it was packed, she saw very few people not wearing their masks. Other than the number of people wearing masks, Noblitt was also surprised that her last-minute seats were not nosebleed seats, but right behind the pit.
“A week before the concert, I was asked by one of my friends if I wanted to go,” Noblitt said. “And I was like, ‘Oh my gosh, I can’t pass up on this opportunity.’”
Like Noblitt, senior Olivia Williams bought her tickets for the same concert about a week before the date of the show.
“I got my tickets a week before the concert from a reseller website,” Williams said. “It was kind of impromptu, but my best friend found some and my parents said OK so we jumped at the opportunity.”
According to Williams, this concert was much different because they had to show a vaccination card or a negative test, in contrast to the concerts she attended pre-pandemic.
“I have been so excited to go back to [a concert] because it’s been a long time,” Williams said. “It was really fun being around so many people who love the same singer.”
Being a fan of Styles and his music is what drew Williams to get tickets for his live concert.
“I wanted to go see Harry Styles because I really like his music,” Williams said. “Just as a celebrity he is a really great person and spreads a lot of positivity, and I love his British accent.”
Fellow fans Hansen and Noblitt said they have been following Styles’ career since he was part of the band “One Direction.”
“Watching him grow as a musician is super interesting,” Hansen said. “I wanted to go because of how much he has grown and I really enjoy his music.”