Spiking it up: Volleyball program adds an additional freshman team 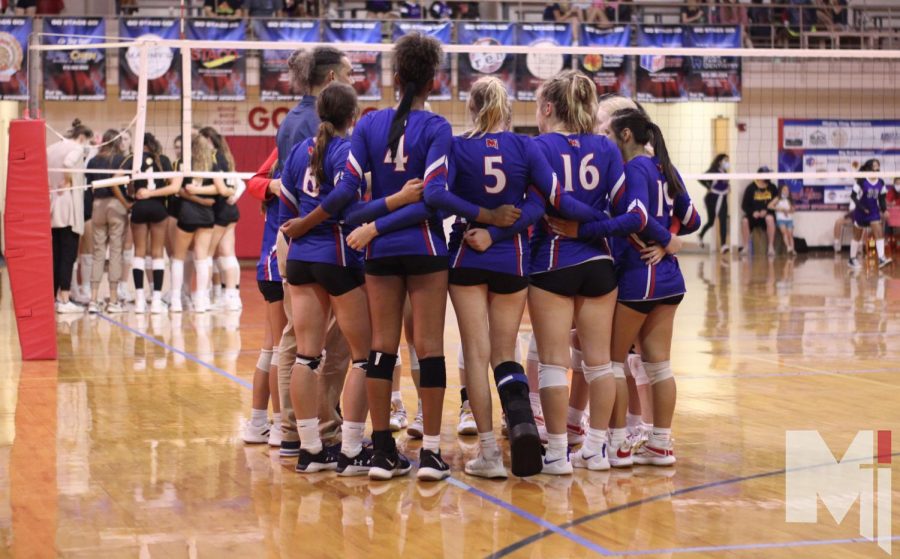 New to the program this year, a fifth volleyball team has been introduced.
With 83 girls trying out, coaches decided to form a freshman B-team this season.
This season there are only three seniors and two juniors on varsity. According to combination team volleyball coach Amy Reed, this year’s teams have a higher number of lower classmen than usual, part of the reason there are five teams.
“We’ve not had a freshman B team, so it’s exciting to be able to have more girls participate in the sport,” Reed said. “A ton of freshmen tried out. We only have three seniors, it’s just young.”
Playing this season on varsity, sophomore Ava Martin said she was surprised when she found out about the new team and is happy for the program.
“In the past I know there haven’t been that many people that have gone out,” Martin said. “Just the fact that they’ve had to cut that many people and we still had enough for five teams.”
Senior Elizabeth Perez said that with so many girls this year, there’s less playing time but she’s happy for them.
“[It’s] kind of sad having less playing time because there’s so many more players and teams, but I’m glad that there’s more women and freshmen get to have an experience,” Perez said.
The girls’ volleyball teams have gone through changes, like practice times and back-to-back games.
New coaches have been introduced this season as well.
Head volleyball coach Tui Atagi has worked as an electrician for Capital Electric for the past 19 years. This is his first year coaching at a high school and he manages to balance the responsibilities of both jobs.
“I work anywhere from five to six hours in the morning there, and then I come here,” Atagi said.
Reed said that scheduling hasn’t been a problem this year and plans have been worked out between the coaches.
“JV always gets the main gym and they always practice right after school,” Reed said. “Just kind of like a seniority type situation and then everybody else is at North Campus.”
Sophomore Kathryn Kolarik said that playing this year is fun, but it still feels a little weird with the new team. Kolarik said that they’ve adapted to it.
“We normally have another team set up the game for the other team,” Kolarik said. “Then reffing, we figured that out. We had the parents do it.”
Assistant volleyball coach Libby Lawrence is also new to coaching volleyball this year. Lawrence said she too was surprised when they added a freshman B team.
“I had said in my interview I really wanted to get involved, but then they said that the freshman A team was really good,” Lawrence said. “So I was like, ‘Okay maybe I’ll just be assistant JV’ and then they added the freshman B team.”
According to Martin, with new teams and coaches this year, the girls have grown as a team.
“Everyone’s trying to get used to it because it is a new coach and last year COVID-19 kind of changed everything but now it’s back in full swing,” Martin said. “It’s a new everything, and we even got a fresh team so I feel everyone’s trying to get acclimated to everything.”