Making an impact: Students serve at Camp Barnabas over summer 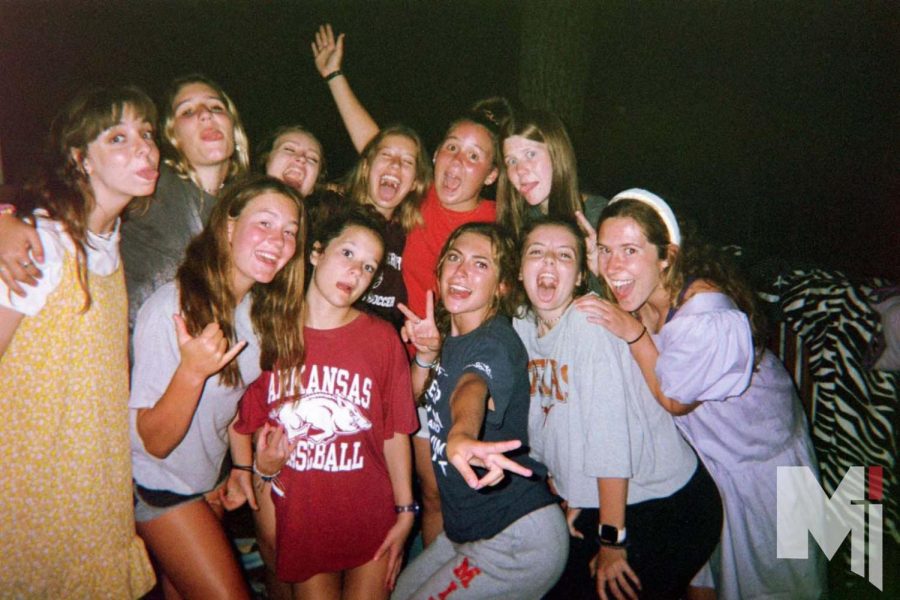 Standing on the back deck of the cabin, juniors Lexi Kurt, Stella Cahalan, Claire Winklhofer and Allison Brentano gather with their cabin at Camp Barnabas as they smile at the disposable camera. The missionaries had just finished their nightly prayers and reflections.

Growing in faith and friendships, participating in outdoor activities filled a week of the summer for six juniors, two sophomores and one freshman.
Camp Barnabas is a Christ-centered summer camp in Missouri for children with special needs as well as people who help serve.
Students ages 14 and 15 work as barnstormers, meaning they help by preparing food, cleaning the camp and serving as a third person for counselors with their camper.
“My favorite part was the two hours that we got to hang out with the campers because we could just go around camp and do whatever fun thing they wanted to do,” sophomore barnstormer Ava Martin said. “They were just so happy.”
Once students are 16, they can serve as a missionary until they are 29. Missionaries support one camper throughout the week. In her first year at camp, junior missionary Allison Brentano worked with a 16-year-old girl.
“I liked seeing the smile on her face when we were doing activities,” Brentano said. “We had a really great bond, and it helped us become closer.”
Attending the camp brought experiences that the barnstormers and missionaries will remember.
“It was really eye-opening because you just see kids that are so fortunate that they got to be there and they just don’t have it easy every day,” Martin said. “We got to help them and hang out with them … they’re normal people that just have difficulties that they have to face.”
Some activities that the campers and leaders got to experience were swimming in the pool or the lake, having a campfire and celebrating with a party each night after dinner. These activities connected the campers and counselors together.
“My favorite part was getting to know the different campers and their personalities,” freshman Avery Kurt said. “It was fun getting to talk to them because they have a different perspective on things.”
The barnstormers experienced some challenges when they spent time with the campers.
“The camper would have meltdowns,” Kurt said. “It would be difficult because they wouldn’t want you to be their boss.”
Being a missionary, Brentano said that some obstacles arose.
“We were with them [the campers] 24/7, so sometimes it got a little rough, but we had counselors to get us through,” Brentano said.
At the camp, the faith aspect is a major part for the attendees. There were multiple worship sessions, daily devotionals and Bible study activities.
“It doesn’t really matter their disability because everybody was welcome into one faith or family community,” Kurt said. “It changed my perspective of how all people can deserve respect but also can have that relationship with God.”
The last party of the camp touched Martin as she saw the campers saying goodbye to each other.
“At the end of the camp, the campers became good friends and they danced and sang in a circle,” Martin said. “At the end they were crying with each other. It was heartwarming.”
Martin encouraged anyone who is thinking about doing the camp to join.
“It’s really fun, and it’ll be a little nerve wracking because you really don’t know what to do, but once you’re there it’s just a blast,” Martin said.
Students who attended Camp Barnabas experienced a new perspective with individuals as well as earned 75 service hours.
“It’s definitely an experience you’ll remember forever,” Kurt said. “It teaches you different aspects of life and how all people can be treated with respect.”