Tackling family & work: Football coach’s son joins the team in his own way 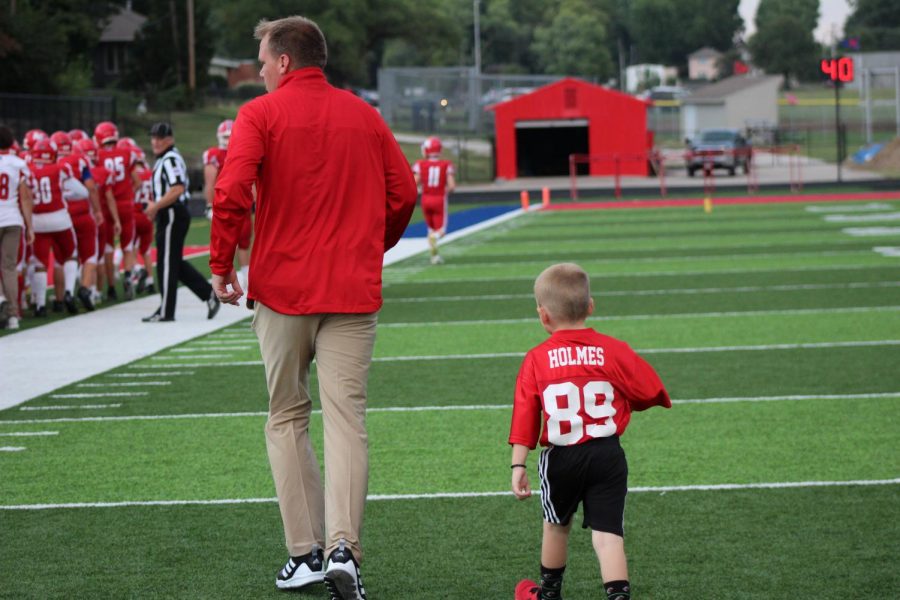 Walking on the field before the game, football coach Jon Holmes’ son Hank Holmes follows his dad as he joins the team before the team’s first home game kickoff. That night, the Stags took their first victory of the season with a final score of 23-20 against rival school Saint Thomas Aquinas.

Every morning parents say goodbye to their kids as they drop them off at school and go their separate ways for the day. However, for head football coach Jon Holmes, his family is part of his work each and every day.
Holmes and his kids show the importance of family by involving themselves in the football team.
Holmes said that spending time with family is a special thing for him.
“[My family] is a big part of the whole program for me,” Holmes said. “As much time as we are around these players and as much time coaches have to put in this thing, any chance we get to bring our kids around, we’re gonna do it.”
Holmes’ son, 4-year-old Hank Holmes, has created a special place for himself on the team.
Although he is not an actual player on the team, Hank Holmes participates in football activities and has become a member of the program.
“You never know what mood Hank is going to be in,” Holmes said. “He may be in a mood where he has his whistle around his neck, and he’s blowing his whistle at [the players] to stop talking. He might be in a mood where he has his cleats on and they know he’s a player that day, or he comes out in a helmet. I think that is the best part for the players.”
According to Holmes, his family lightens the mood of the games and motivates him to be a role model.
“They motivate me because they see me all week, and they see the struggles I’m going through with gameplay stuff, practice stuff,” Holmes said. “They see you coming home late, they see you eating dinner by yourself when they’re getting ready for bed. That’s what’s fun on game day; it’s kind of like pay day.”
According to Holmes, being able to see his kids practice alongside with his players is one of the most fulfilling parts of being a coach.
“As a coach it’s great to see how the players interact. Some of them may have younger siblings, but some of them it’s the way they interact. Hank loves Jaylen Burch. He loves him. Jaylen will come over, take a knee and talk to him everyday. Jaylen is one of the guys,” Holmes said. “Hank will come home and he remembers his name. When he watches games, Hank knows his number. Those are the things, as he gets older, that get more fun with him being around because he gets to know these kids too.”
Out of the 108 boys in the football program, senior Jaylen Burch has become one of Hank’s closest teammates and role model.
“I talk to him every time I see him and I try to show him love.” Burch said. “He’s excited to see me. We just look forward to seeing each other. We talk about everything. We talk about his super heroes like Captain America and Spiderman.”
According to Burch, Hank has an effect on the mood at practice and makes everyone happy just by being present during their various exercises.
“One time during the watermelon scrimmage me and Hank were on a team and Hank was shooting everyone with water,” Burch said. “He ended up switching up on me and getting on Aidan Wing’s team and started spraying me.”
Over the summer, junior Aidan Wing and Hank grew closer during a football camp.
At the camp, Wing was Hank’s coach and helped mentor him on the field.
“I feel like being his coach definitely helped our relationship as we got closer,” Wing said. “We worked a lot at individual work, played a lot of catch, worked on some blocking and made a few plays for Hank to score some touchdowns.”
The importance of family is highlighted in the football program.
According to Holmes, the team has welcomed his family and the community is really special.
“I’ve grown up here and gone to school here, so it means a little bit more to me to be able to have my family because I want my kids to go through the same experience I did as a kid,” Holmes said. “We try to always remind these guys that they’re kids and let them have some fun with my kids and letting them interact with them is what makes it fun.”
As an honorary coach and teammate, Hank has made his mark on the team by creating friendships with the players.
“I think we are so close because we are a lot alike, I think we both love our family and we both love football,” Wing said. “I see Hank as a teammate. I see him as family-like my little brother.”