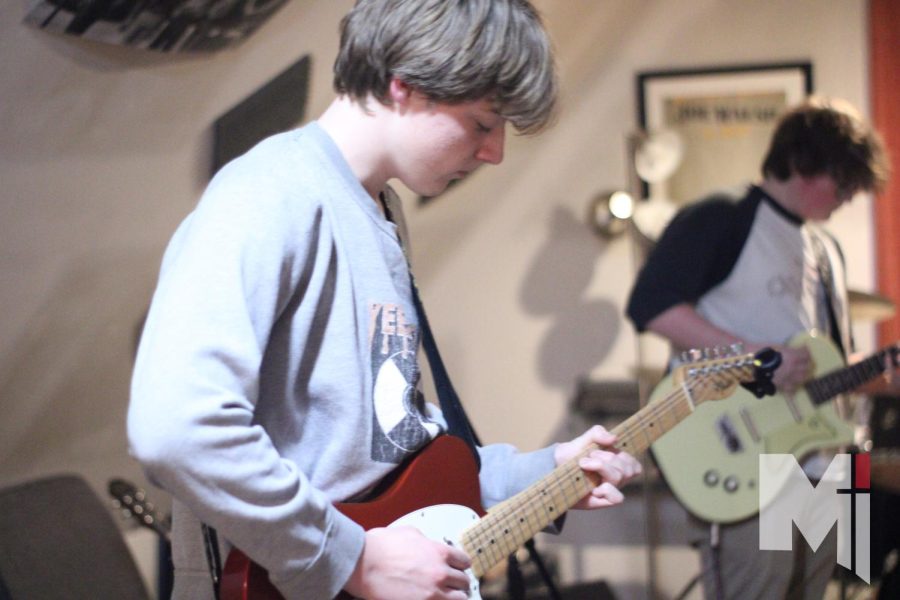 Jamming in his garage-studio with his bandmates, junior Robert Allmon strums on his guitar next to junior Ryder Cahill. The band, named Zero Below, plans on continuing to make music together after they are all out of high school. “Our goal is to make it through college, at least,” Allmon said.

On the night of the talent show at St. Elizabeth’s grade school, a group of eighth grade boys stepped up to put their musical talent on display.
Their rendition of “Sixteen Saltines” would be the first of many times the boys performed together.
“When we all came together as a band, we were really big fans of The White Stripes along with other Jack White projects, so it made ‘Sixteen Saltines’ an easy choice,” junior Robert Allmon said.
Allmon and junior Ryder Cahill have been playing music together since they started the band in eighth-grade. Junior Luke Crawford joined more recently, after Allmon and Cahill encouraged him to try out the drums. The band currently goes by Zero Below.
The boys practice in Allmon’s garage attic for their upcoming performances. At his house, the band has access to a drum set, guitars, amplifiers and microphones. Allmon, who plays the guitar, said they enjoyed playing in the talent show together, so they decided to keep the music going.
With inspiration from bands such as Wilco, Weezer and the Cars, the boys play mostly alternative rock music, which they write themselves.
“Me and Robert usually write the songs,” Cahill said. “We’ll start out with a guitar part we like, or we hear a drum part, play something according to it and then try to make up a melody.”
Allmon said he enjoys the improvisation of song-writing, working with his friends and making music.
“I wouldn’t say there’s a song-writing process other than it is a flood of ideas all at once,” Allmon said. “We all write songs on our own, and we will call the others with ideas or questions for their instruments on the song. Lyrics are always the hardest and last part, though.”
Cahill plays guitar and sings, while Crawford plays the drums and a boy from Rockhurst plays bass. As a more recent member of the band, Crawford said he noticed a difference as he increased his experience on the drums.
“Once I started trying a lot harder to make it sound good, it was a whole different thing,” Crawford said. “We got to play more complicated stuff.”
The band plays at local venues in the KCMO area. One of their most recent performances was at Smoking ‘n Waldo, a barbeque competition at the grade school where the band first began.
“That was really cool, just going back,” Crawford said. “And because we knew most of the people in the audience, it was just really fun.”
The crowd is usually made up of the band’s parents and friends.
According to Cahill, he enjoys getting up on stage and doing the band’s thing, but the worst part about performing is setting up beforehand.
Nerves are another obstacle the boys face, but according to Allmon, the experience is worth it.
“I get nervous right before the show, but once you’re up there you can’t leave, so you just try to do your best once you’re out there and have fun doing it,” Allmon said. “My favorite place we’ve played at is probably Governor Stumpy’s because that was the most time we were allowed to play and the turnout was really good.”
Arranging time to practice around school and the boys’ work schedules presents somewhat of a challenge for the band, Crawford said. Despite this, the band is typically able to practice one to two times a week outside of school limits.
“I feel like a lot of extracurricular activities are directed by a teacher or some kind of instructor, so it’s nice when we can just play whatever we want,” Crawford said. “It’s just completely up to us.”
The boys use their independence as a group to create original music, using their song-writing skills and inspiration from one another.
“It’s fun having people to bounce stuff off back and forth and coming up with your own stuff,” Cahill said. “When you finally get something you’re proud of, it’s cool.”