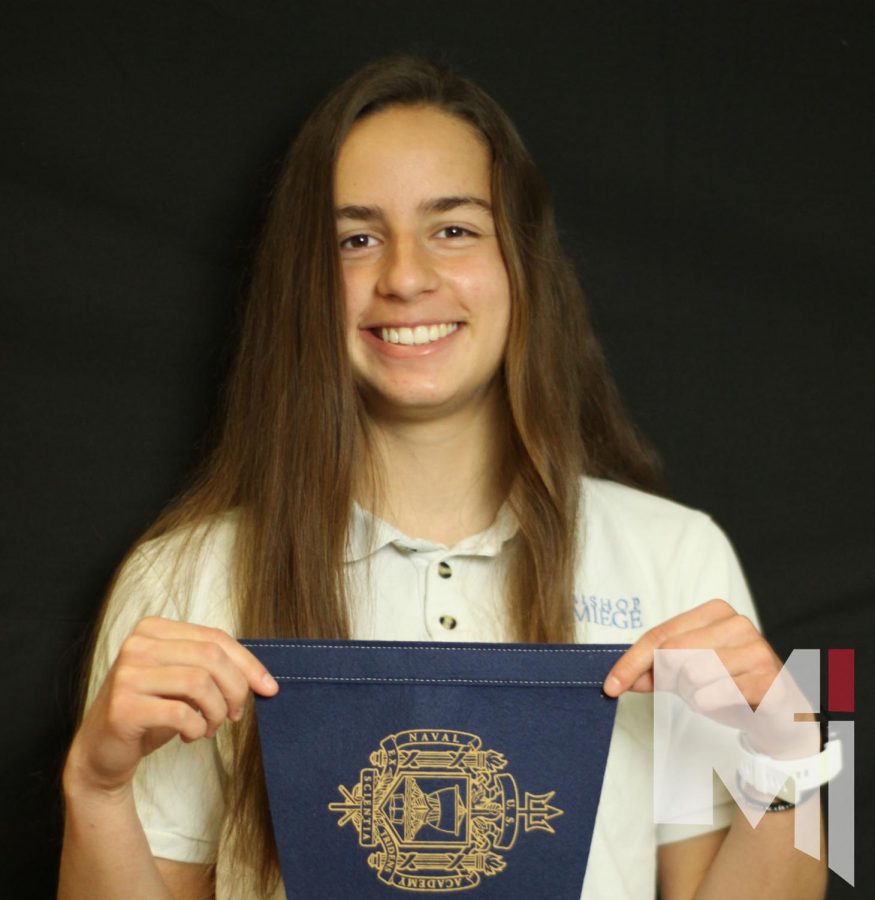 After graduation, senior Sarah Perico will not be retiring her school uniform like the rest of her classmates. Instead, she’ll trade it in for another kind of uniform: a U.S. Navy uniform.
“It was the middle of junior year, and I figured out that I wanted to go to the military,” Perico said. “I decided to go to a college fair at Rockhurst. I saw the Naval Academy front and center and went to talk to them. It was just a great experience.”
From there, Perico started the year-long process of being admitted to the Naval Academy. As drawn out as it was, Perico was nothing less than determined to excel throughout the year.
“First, you have to do a pre-application with basic information. Then you have to wait a couple months until they approve you to be a candidate,” Perico said. “After that, you have to get a congressional nomination from either your two senators or your house. And I was able to get Senator Moran to nominate me, which was awesome.”
Perico continued to be on a roll after getting her congressional nomination, and as the year went by, her dedication was tested in a variety of ways.
“Usually in the fall, you have to do a lot of scheduled interviews,” Perico said. “You also have to work on your essay and transcripts and your regular application.”
Apart from the numerous applications and interviews, the physical test, which included a mile run and ball throw, and the one-page essay both stood out as formidable challenges in the process.
“I heard that they really look at the essays,” Perico said. “So I worked on that essay for a long time. I had a couple of different teachers and my dad help me out with it.”
Following the essay, Perico completed a regular application about citizenship and general information, filled out information for sports and gathered teacher recommendation and approval. Then began the wait.
“After the fall interviews, there’s basically a dead period,” Perico said. “Then, on Christmas Eve, I got a letter of assurance, which is basically a guarantee that I’m doing track for the Naval Academy.”
With the lengthy application process complete, Perico will do a number of years of service at the Naval Academy in Annapolis, Maryland. The work doesn’t end there, but Perico is looking forward to what she’ll do next.
“I’m not sure about what I want to do. But I’ve been looking at a Surface Warfare Officer role,” Perico said. “Once you graduate from the Naval Academy, you’re commissioned as an officer into the actual Navy and commissioned to a ship. And then, if you’re on it, the ship goes around the world.”
Because she loves traveling, Perico is excited about the places she’ll go. However, the people who have supported and inspired her throughout the complicated process still hold a special place for her.
“My parents told me that they were not going to remind me of any deadlines. They said that it was my thing, and if I really wanted to do it, then I would have to work for it,” Perico said. “But my family and friends have supported me since the beginning. I did everything myself, but they were always there, cheering me on.”